February 2003
The initial assault on the east face of Middle Knob began in February 2003 when we actually completed 90% of the needed clearing. Other than oak grubs there were few interesting plants here. Our seeding here has been very encouraging. We also have placed several plugs here (prairie smoke, harebell, butterfly weed, New Jersey tea) since there was not much competition growing here. The following pictures were taken before work started. The photo above was taken from the east side of North Knob looking south toward the east side of Middle Knob. Trees in the background due south are on East Knob. If you have read the section about East Knob you may be able to identify North Cherry on the edge of East Knob. The far background is the tree line on Eight Oaks across Wade Creek. 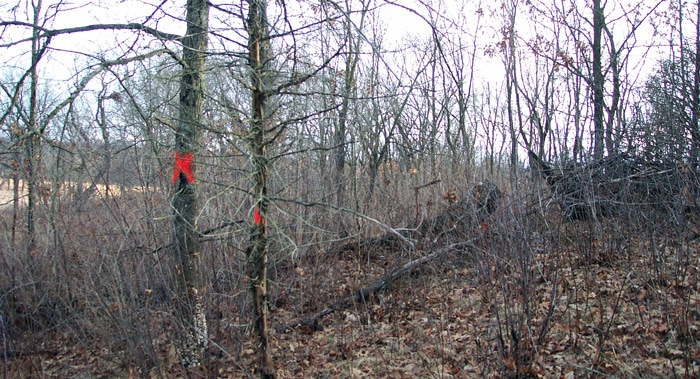 February 2003
The photo above is a closeup of the thicket on the east side of Middle Knob looking south. This photo is the upper half of the slope. It was taken from the point where the little blue stem ends in the previous photo. In early 2012 Tim Keller was visiting North Knob with us and asked why there was such a clear line of vegetation change at that point. 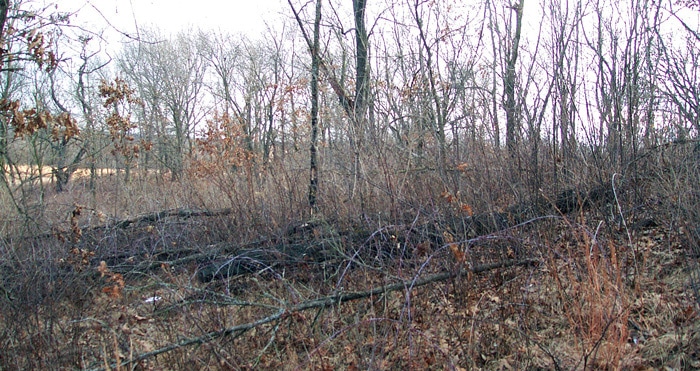 February 2003
The bottom half of the slope looked like this (photo above). At the far left side in the background you can see the ugly North Cherry on the north side of East Knob. Refer to the East Knob Hickory Hollow Section for details. 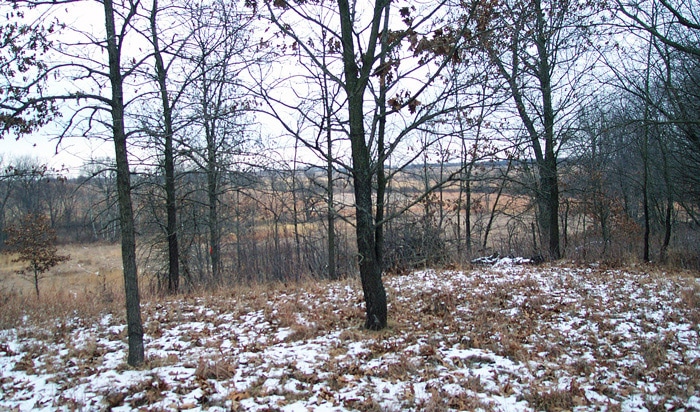 January 2003
The photo above was taken from the top of Middle Knob looking southeast. The far tree line on the right is Eight Oaks. In 2011 you can clearly see the Hamill Winter ridge from this location. Behind the largest tree trunk, the very light tan spot becomes Lake Aldo in Wade Bottoms. Look for it in the next photo. 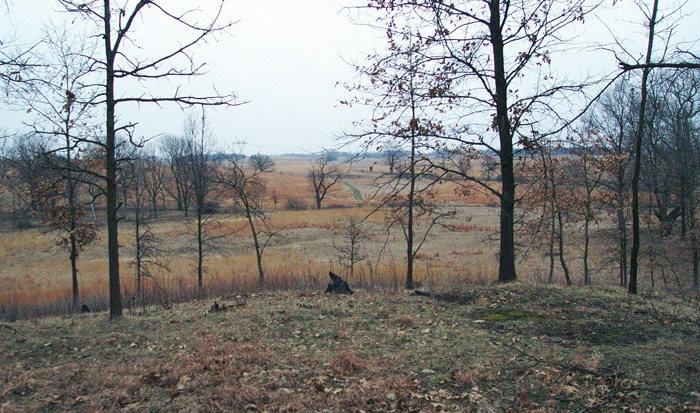 March 2006
In the center distance is the cherry tree on the Ditch at the south tip of Triangle. Just to the right of it is the east/west 2-track between the Aldo Knobs and Wade Bottoms. South of the 2-track is the light tan area which become Lake Aldo with the 2008 rains. If you stare long enough, the cross at the right side of this photo can be located in the previous photo, as well as Lake Aldo and the cherry tree on the Ditch. 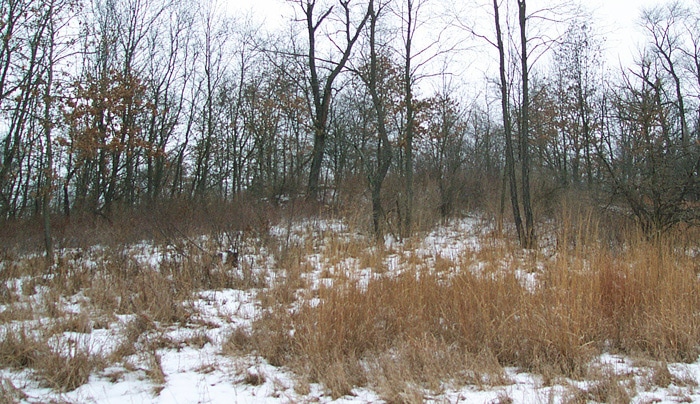 February 2003
As on North Knob, most of the black oaks on Middle Knob have been killed by oak wilt. Much of the debris shown in the first photos in this Section was dead fall small oaks. A sequence of Saddle photos later in this Section shows Middle Knob becoming more open as the oaks die and are taken away. We always wait for dead trees to fall over themselves so they can provide insect habitat for food for all the woodpeckers which live in Big Woods. Photo above is looking west up Middle Knob from the east base of the knob. 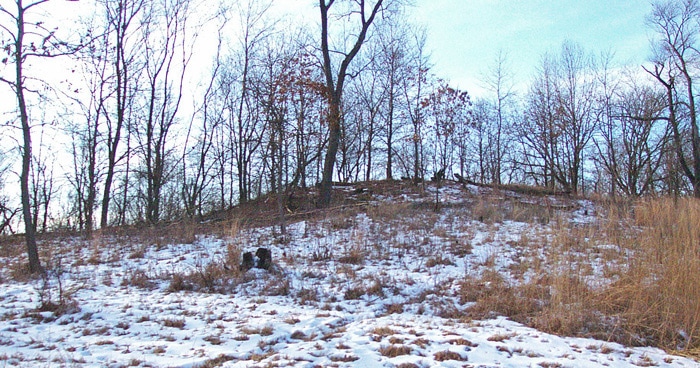 January 2004
In 2003 we had already removed quite a lot of trash from this area before the geoboy came in January 2004. So there is not much debris left on the ground here. You can match “Y” shaped tree in center of both photos. 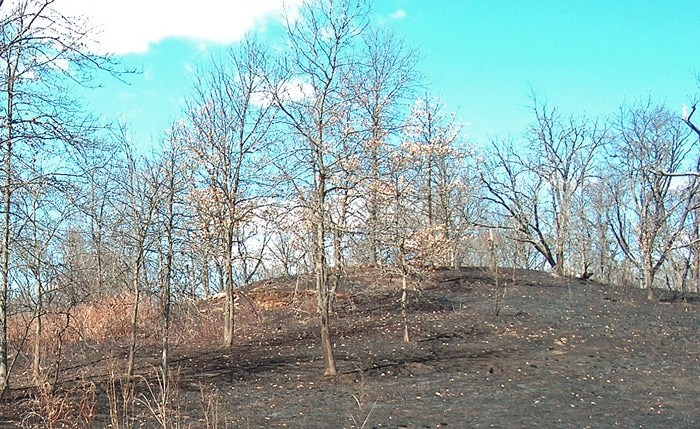 We have had very good results from seeding this area.
​
Middle Knob and Saddle Part 2 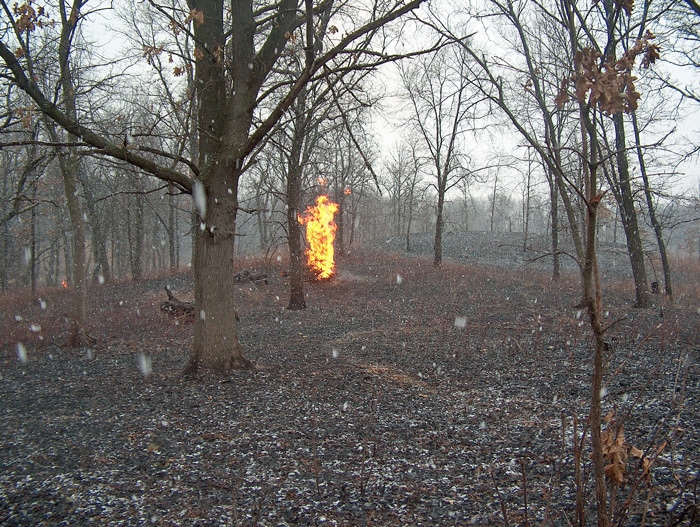 April 2011
The Saddle, shown above in an April 2011 photo is the connecting ridge between Middle Knob and South Knob. It is the western
“backstop” for Hickory Hollow and the eastern boundary for Blue Bell Valley. This photo is taken from the edge of the western end of
South Knob looking all the way north across the Saddle to Middle Knob. The burn pile here is #14.22; this is location 14 for burn piles and it’s the the 22nd time it has been burned. So we have a series of burn pile photos to the north which show the top of Middle Knob as it changes. The small orange dot in the left background is burn pile #9 located west of North Knob. Burn piles will burn even when it's snowing. 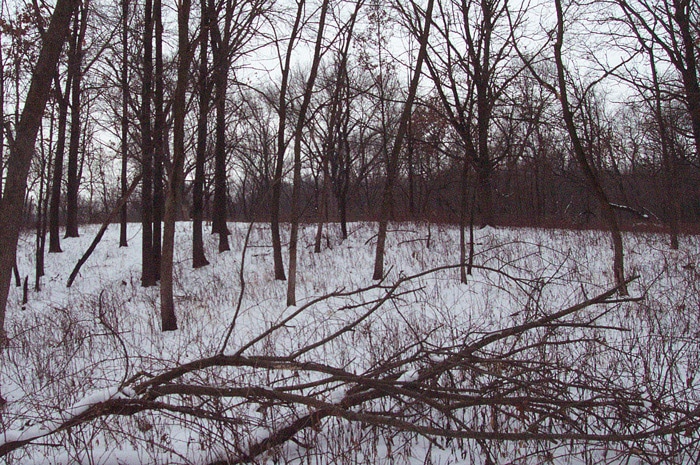 January 2004
The picture below was taken while standing at the burn pile #14 location and looking south to South Knob. This was before any work by us or the geoboy forestry mower was done. 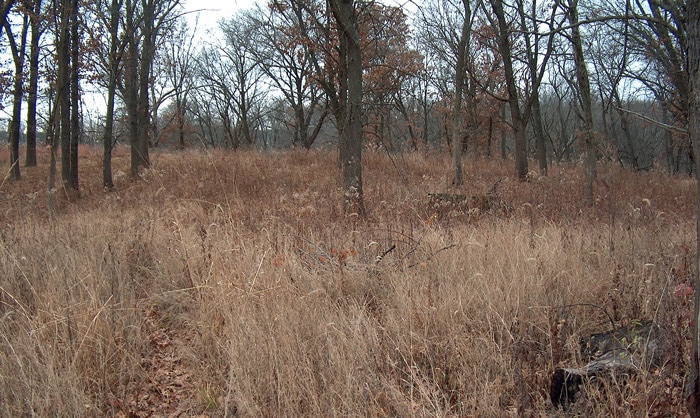 November 2011
The photo above was taken at the same location as the previous photo. The burn pile is partly visible in lower right corner. You can pick out the cluster of oaks at the left in each photo. 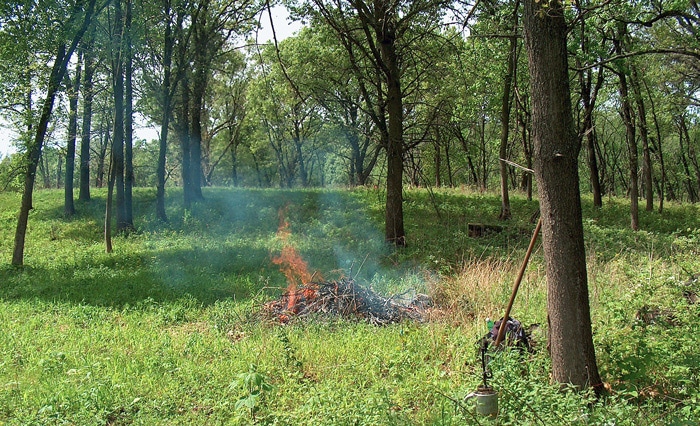 May 2012
Prescribed fire occurred December 2011. This area now truly has an open savanna feel to it. 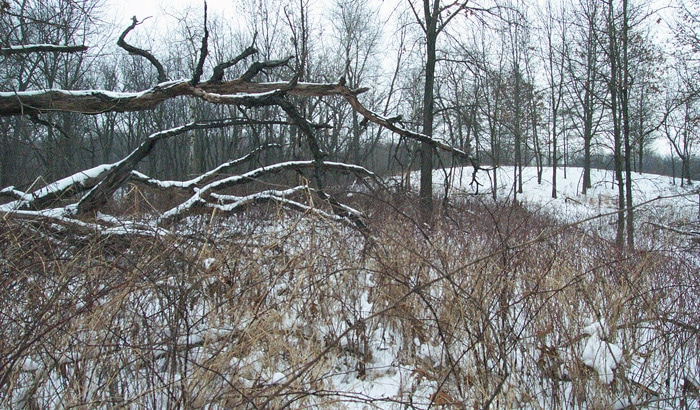 January 2004
Now go back to the beginning to visit more photos from the past. The first of the previous three photos was taken in January 2004. I pivoted 180 degrees and took this photo. It was also taken in January 2004 from the same location, only facing north instead of south. The time is right before any work on the Saddle, before the geoboy and before the first instance of burn pile #14. This photo was taken from this location on the Saddle because I literally could not walk any further to the west. Over time, oak wilt has thinned out the black oaks on Middle Knob which is the rise in the background. 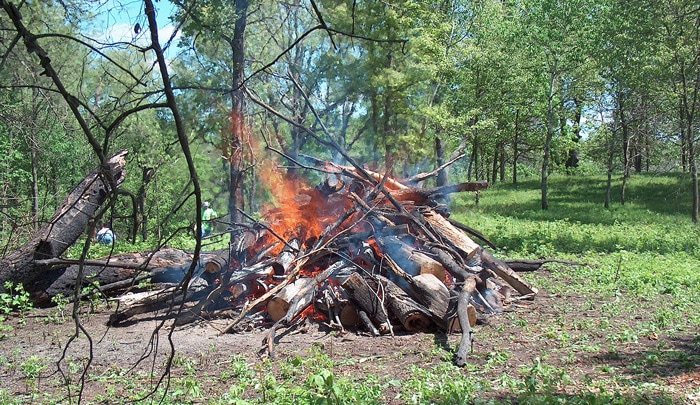 May 2004
Follow the sequence in the next seven photos as Middle Knob is transformed into an open savanna. The geoboy came in February 2004. Exelon employees came for a workday in May 2004. There was lot of fuel for brush pile #14. Middle Knob is in the right background. 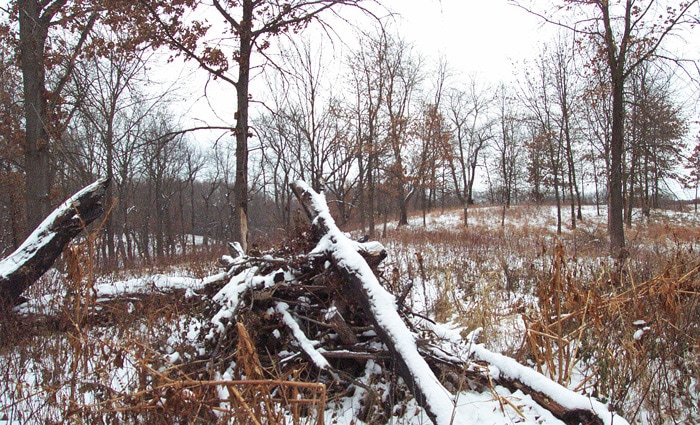 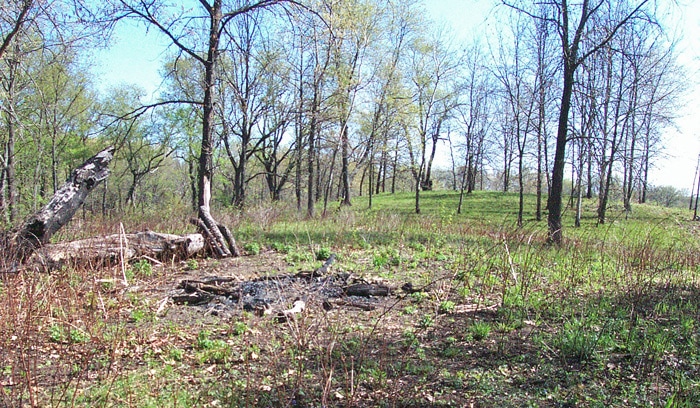 December 2009
A closeup of Middle Knob as the oak wilt is thinning out the small black oak. Hank is cutting fallen trunks into movable pieces to drag to burn pile #14. 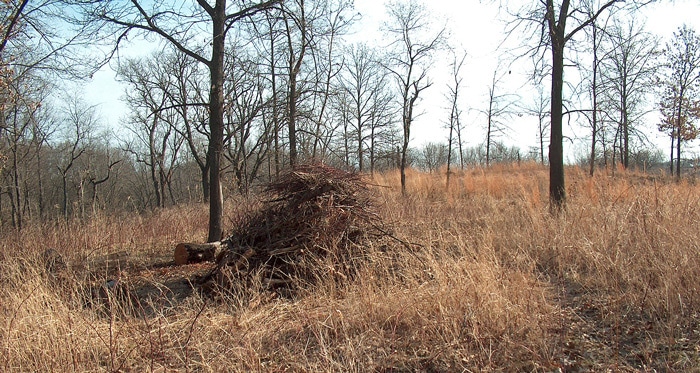 March 2011
Back to the same position on the Saddle at brush pile location #14 looking north at Middle Knob. Lots more trees are gone by 2011. 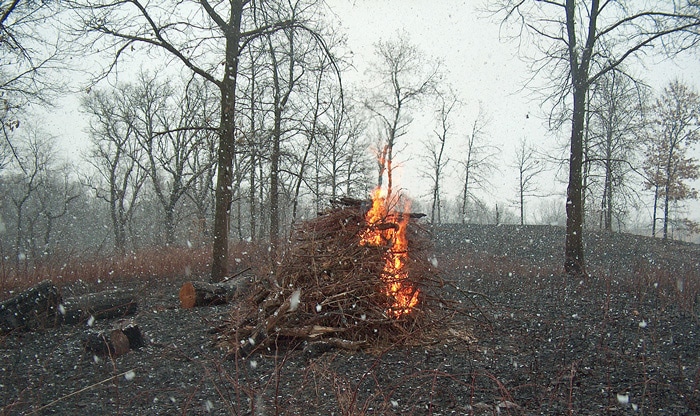 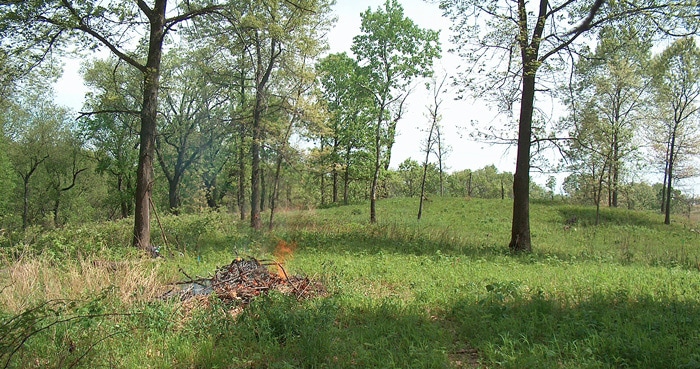 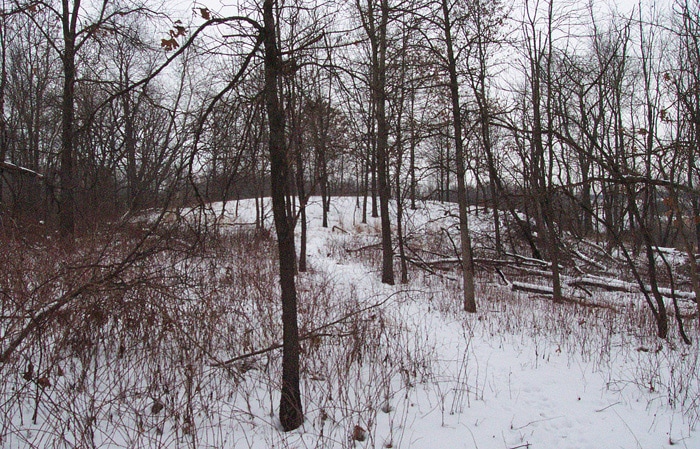 January 2004
This photo goes back to 2004 just before we started working in the area. So how much progress have we achieved? You can see why brush pile #14 has been burned 23 times as of Spring 2012. It does not appear in this photo because the photo predates the first instance of the burn pile. There are lots of savanna plants on Middle Knob and the Saddle, but they don’t show up well in a landscape scale photo (or with snow on the ground). See Big Woods plant list for details.
​Back to Big Woods Table of Contents