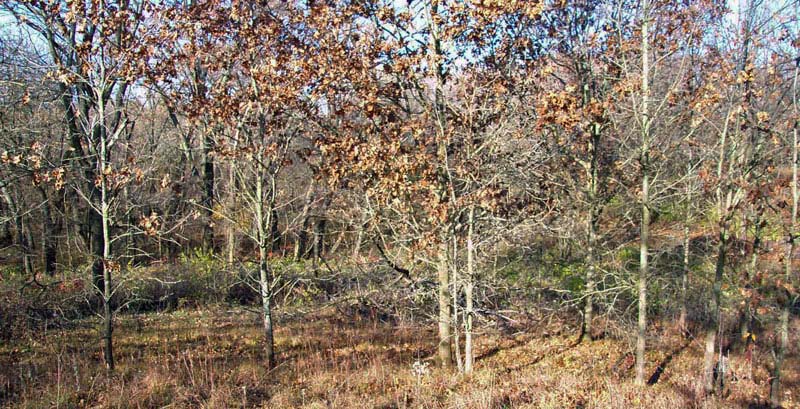 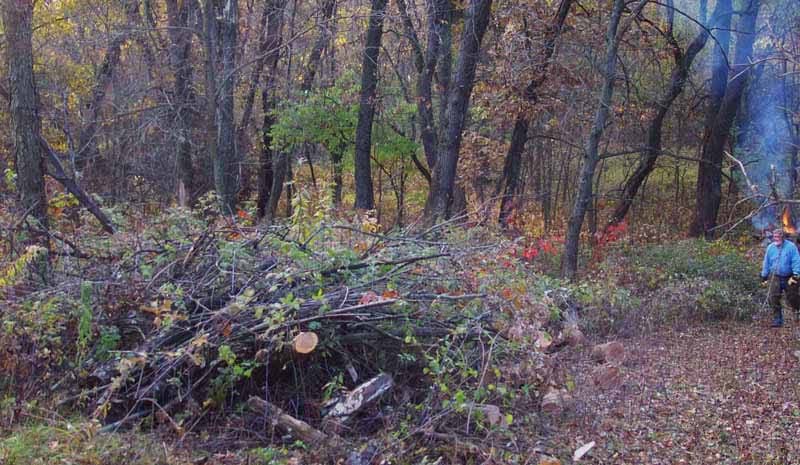 November 2002
​Here is a close up photo of the impenetrable pile of trash west of the black oaks in the center of the previous photo. 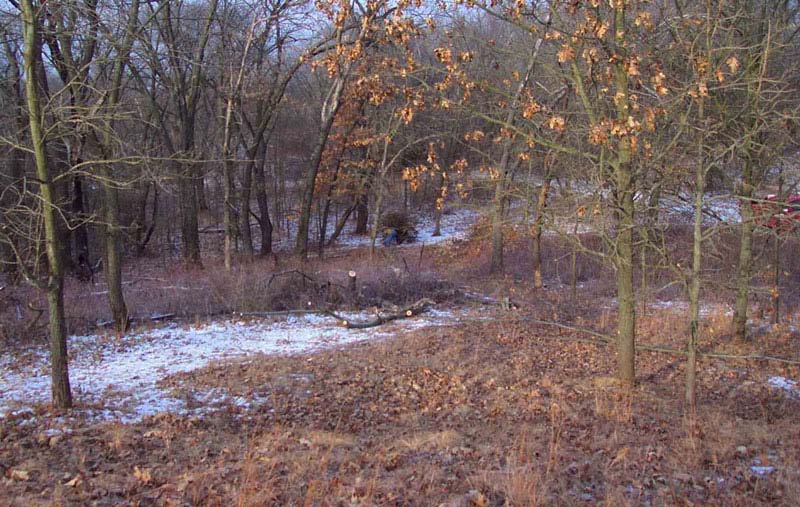 January 2003
​We burned brush at burn pile #9 on five days in January and February of 2003. You can almost see Point 19 if you are familiar with this area. The red truck is at the right edge of the photo, parked on the northern boundary/ Lee–Ogle County Line. Point 19 is at the western end of this lane. 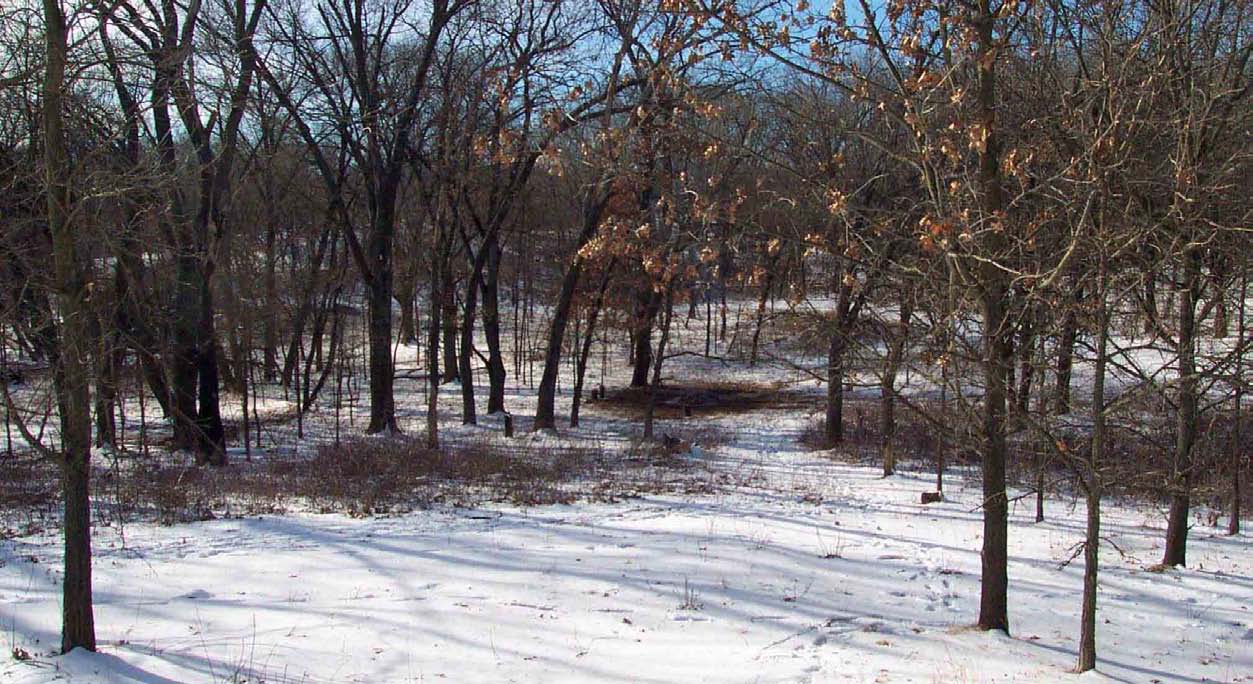 February 2003
​This photo in February 2003 is instance 9.8 of this burn pile which is much improved from the status above in January 2003. As of  April 2011, this burn pile is at instance number 9.27. Snow always makes an area look more open. Photo taken looking west from North Knob.
The area around brush pile #9 which is west of North Knob continues to evolve. Oak wilt has killed the small black oaks seen here. In the center of the photo just left of the burn pile there is a large cherry whose trunk splits into two large branches a quarter of the way up the tree. It is barely visible in the 2003 photo but much more prominent in later photos. 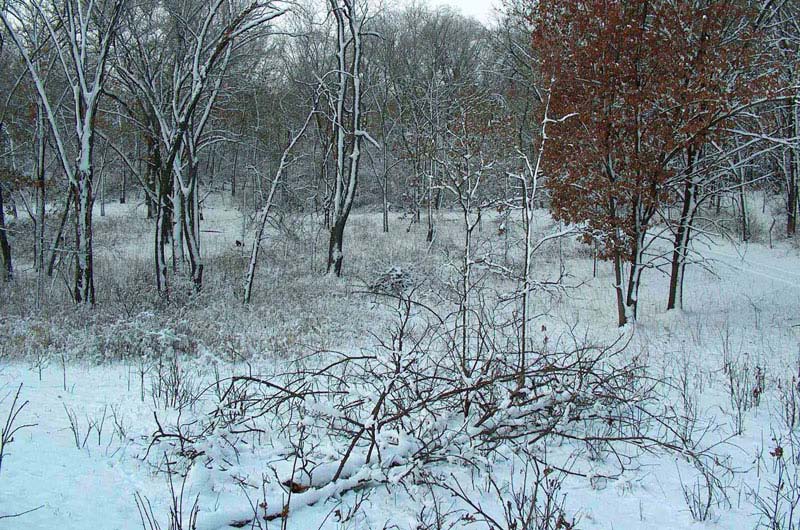 December 2007
​More of the dead black oaks have fallen over. You can begin to see Big Woods evolving into an open savanna. It is visible where the 2-track western boundary runs south from Point 19. 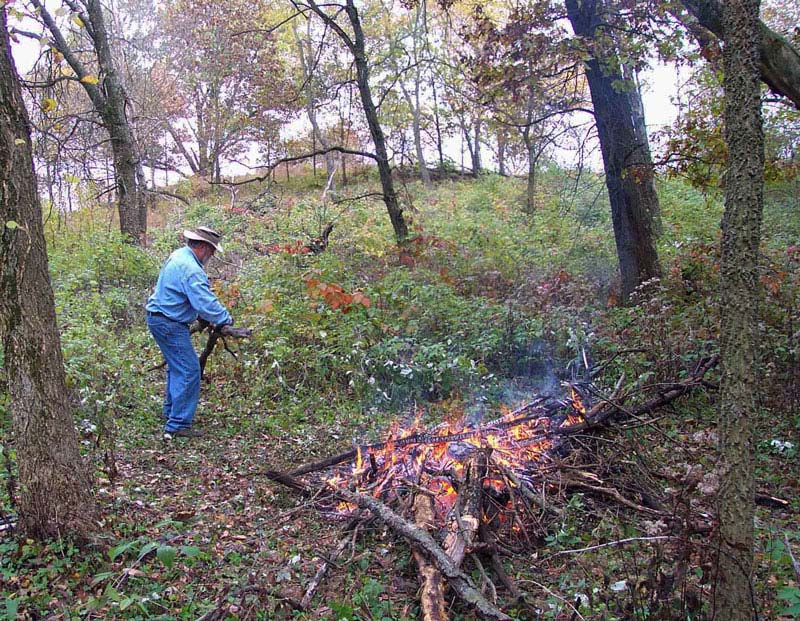 October 2002
​Looking at the changes from a different perspective, this series of photos was taken from west of burn pile #9 looking east at the top of North Knob. The first photo again shows how dense the brush initially was between the burn pile #9 location and the west side of North Knob. 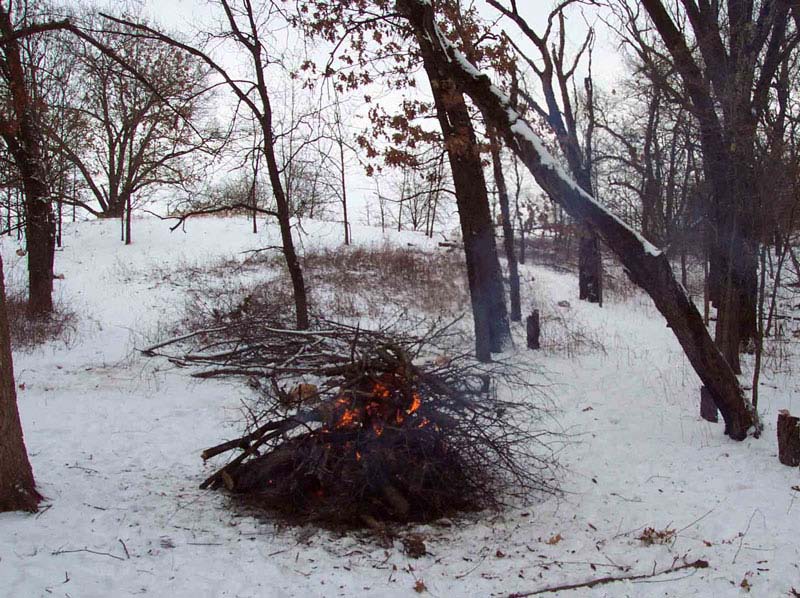 February 15, 2003
​By 2003, there were two cleared paths from the west to the top of North Knob. Eventually we began pushing the “right” path further to the south. The partial trunk at the left of this photo and the previous photo is the same tree. 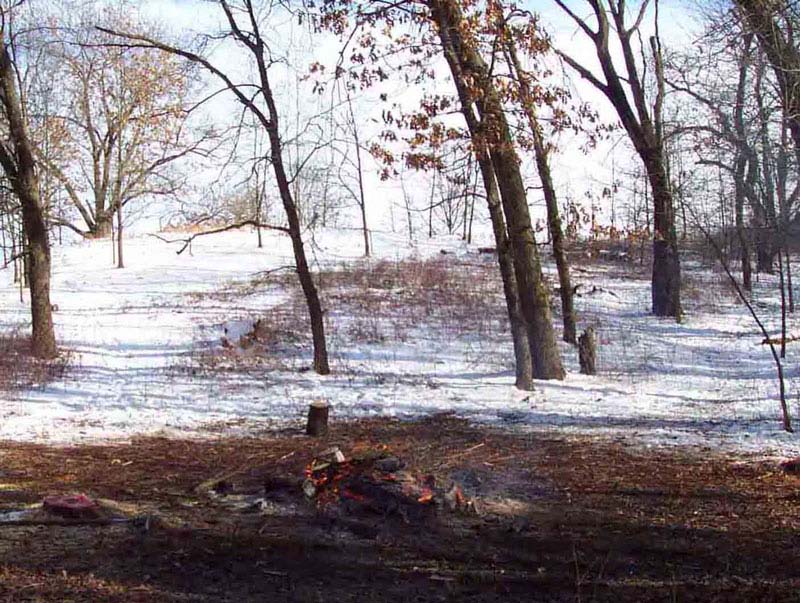 February 16, 2003
​By the end of the next day, you can look at the left of this photo and see the stump of one less undesirable tree. 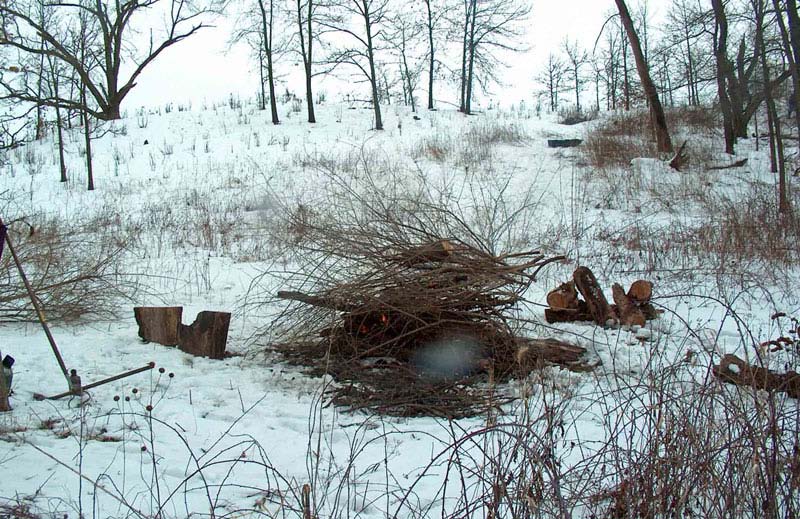 February 2010
​There was a workday in January 2010 when other volunteers helped push back the brush to the south on this west side of North Knob. This photo is what the area looked like after the workday. 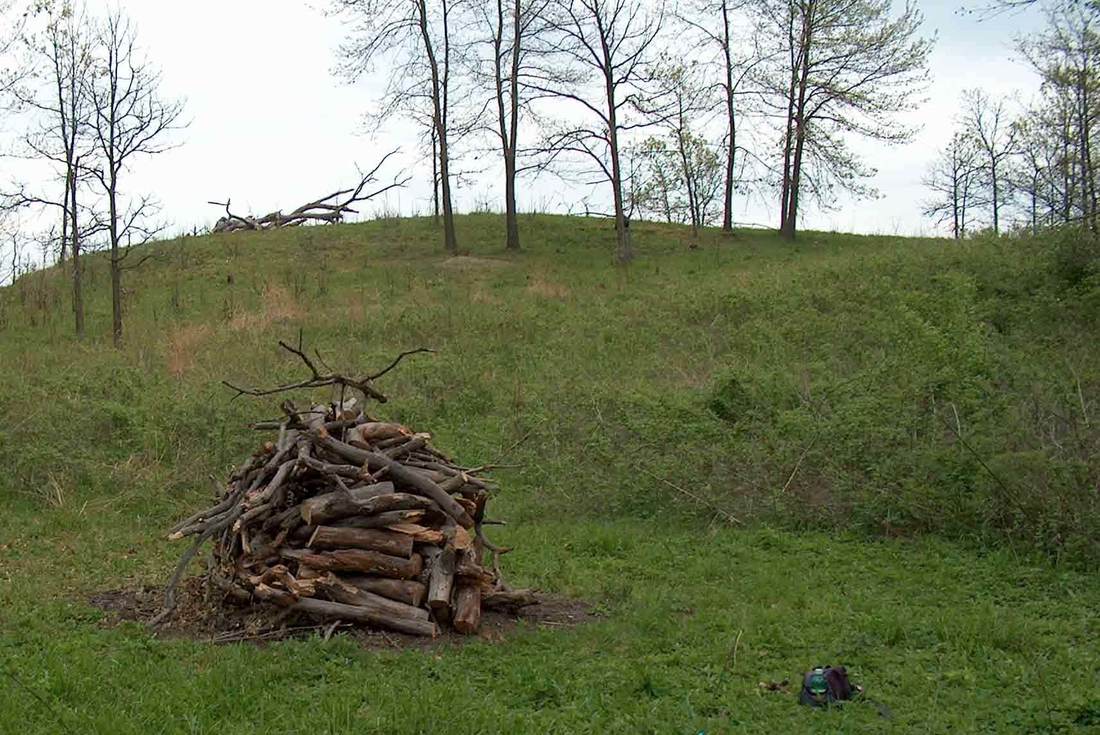 April 2012
​Norris is no longer with us. Can you say oak barrens? 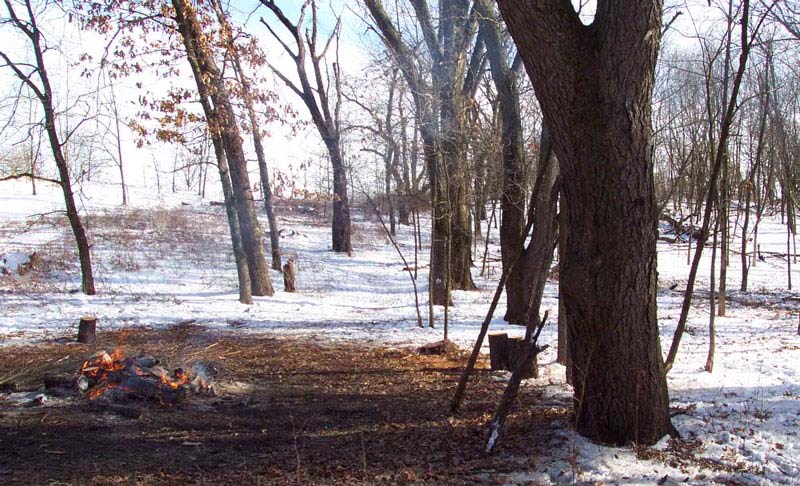 February 2003
To appreciate the effort that went into the February 2010 photo, the next three photos show how much additional stuff had fallen
over since we first built burn pile #9 and before the workday in 2010. The East Knob Section also has a good illustration of having an area relatively clear and suddenly lots of storm damage requires another major clearing effort. Also see Brush Removal Section.The photos above from February 2003 through April 2012 are facing east. This photo is more southeast. This south “wall” is still a problem in 2012 with oak wilt taking another large bur oak which is still standing dead. Dead trees fall over and create prime habit for weeds to flourish. The two photos after this are taken from a point halfway up North Knob looking south in January 2010 before that workday.
​These are before photos for the photo above taken after the January 2010 workday. 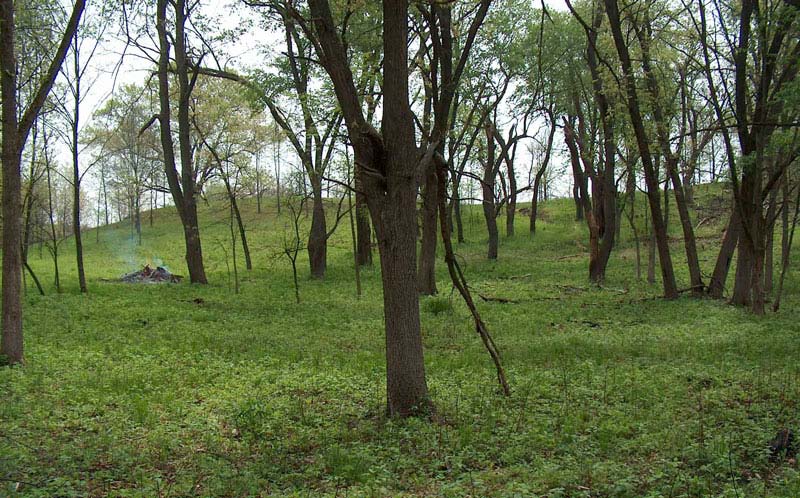 April 2004
​This last set of photos is taken from the western boundary 2-track just south of Point 19 looking to the east. The crown of a of healthy Norris is clearly visible on North Knob. Most of the small black oaks on North Knob are still alive also. The burn pile “Y-tree” is still useful as a marker. 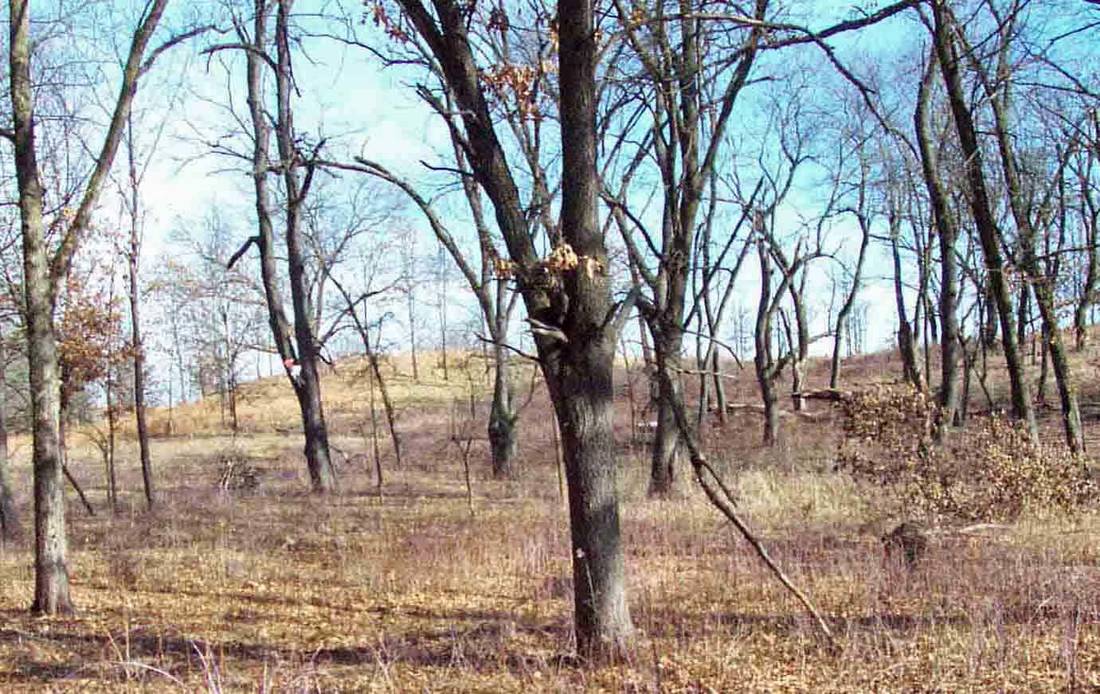 March 2006
​The next photo shows pieces of trees which fell south of the “wall” as well as some of the deadfall up the side of North Knob. Also as seen at the beginning of this Section we know that many of the small black oaks in the distance are now dead from oak wilt and are thinking about falling down. 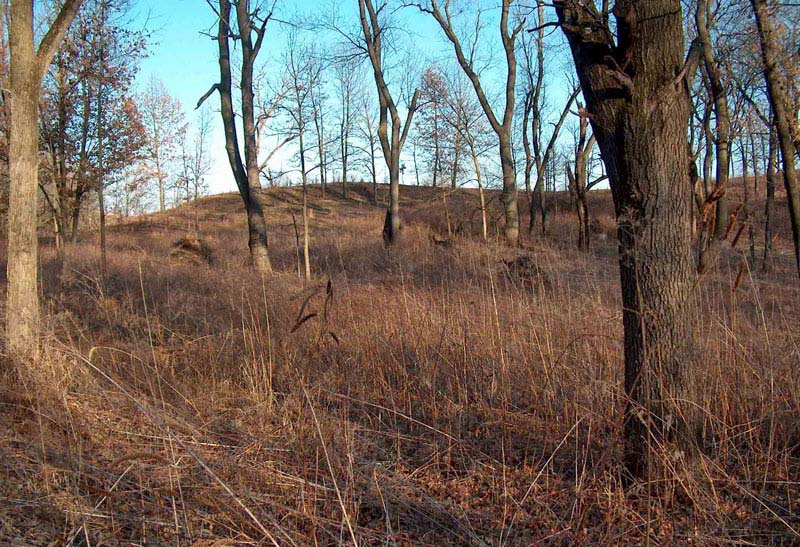 March 2012
​Now you can barely see the skeletal remains of Norris behind the burnpile “Y” marker tree. Just right of center in the photo, what looks like another burn pile is the rootball of a huge tree which blew down in a summer storm. It fell immediately after we had loaded that area with seed and thus covered the seed up.
​See the Seed Section for details of seed collected and planting plans. On this west side of North Knob we made an exciting
discovery in 2005. Some seed we collected and Mary & Al Meier planted for us had actually appeared. This is the earliest photo of
North Knob in which you can see the round leaves of Wulfenia bullii. By 2011 they had lots of Pedicularis canadensis friends.
​​Back to Big Woods Table of Contents