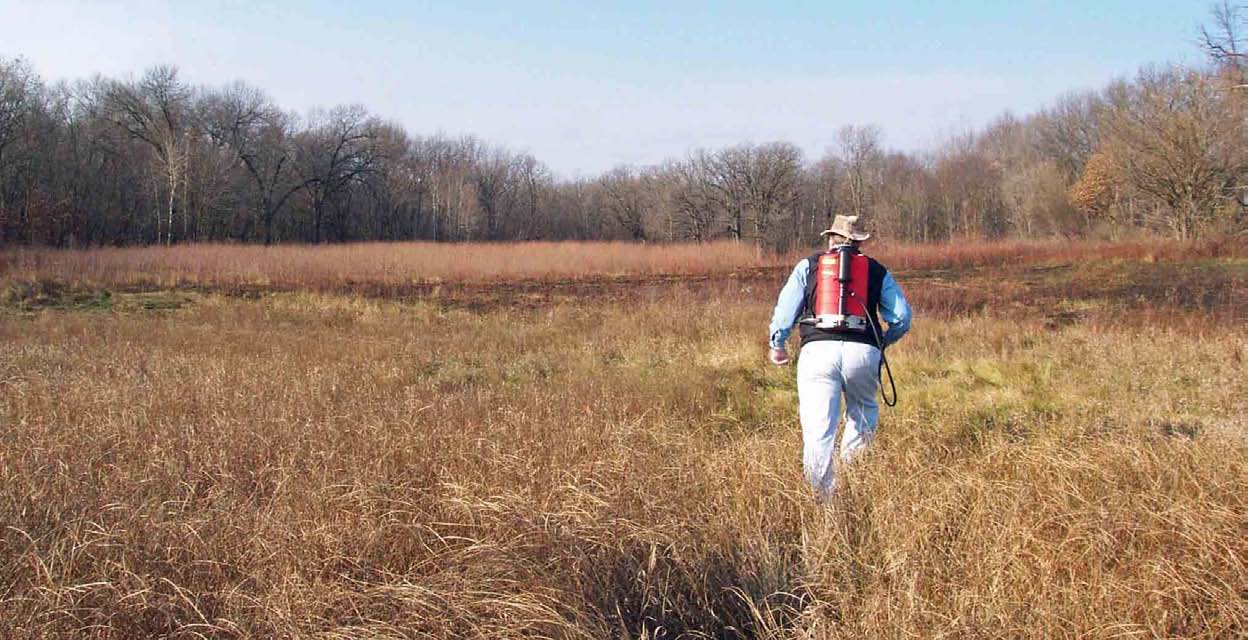 December 2001
​The Sedge Meadow is located between Red Head Savanna and South Knob. It extends from the South Ditch west to the Wet Savanna. Fall 2001 was the beginning of the willow wars. Photos show the extent of willow in the Sedge Meadow. Even though it required several years of effort, eradicating the willow was our first big milestone of success for Big Woods. The photo was taken at the old 2-track looking west at Sedge Meadow. Some willow extended all the way north to the base of South Knob; you can see it to the right of Hank’s head. Small non-savanna trees within thirty feet of the existing Sedge Meadow were subsequently girdled by Bill Kleiman; this made the open Sedge Meadow area quite a bit larger. 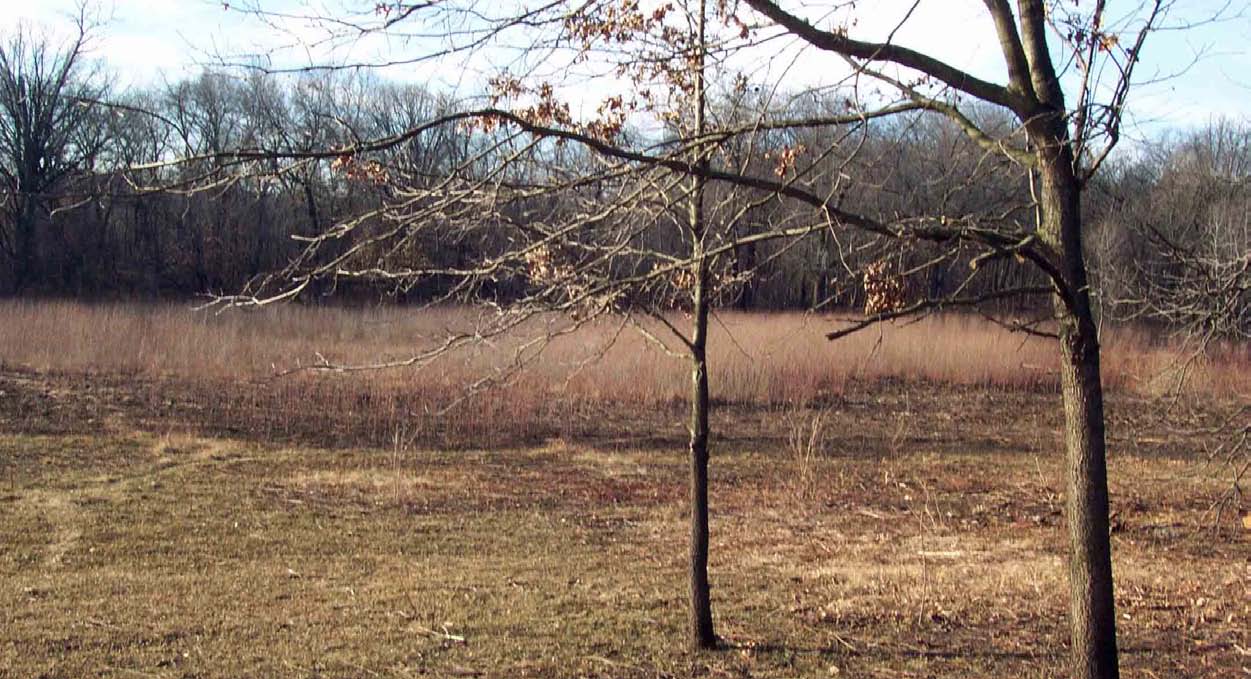 January 2002
The photo is taken at the southeast base of South Knob looking southwest at theSedge Meadow. The Big Woods Unit was burned in November 2001. Fire only top kills willow so the resprouts must still be clipped and painted with herbicide. The burn makes it look like less willow than was actually there. 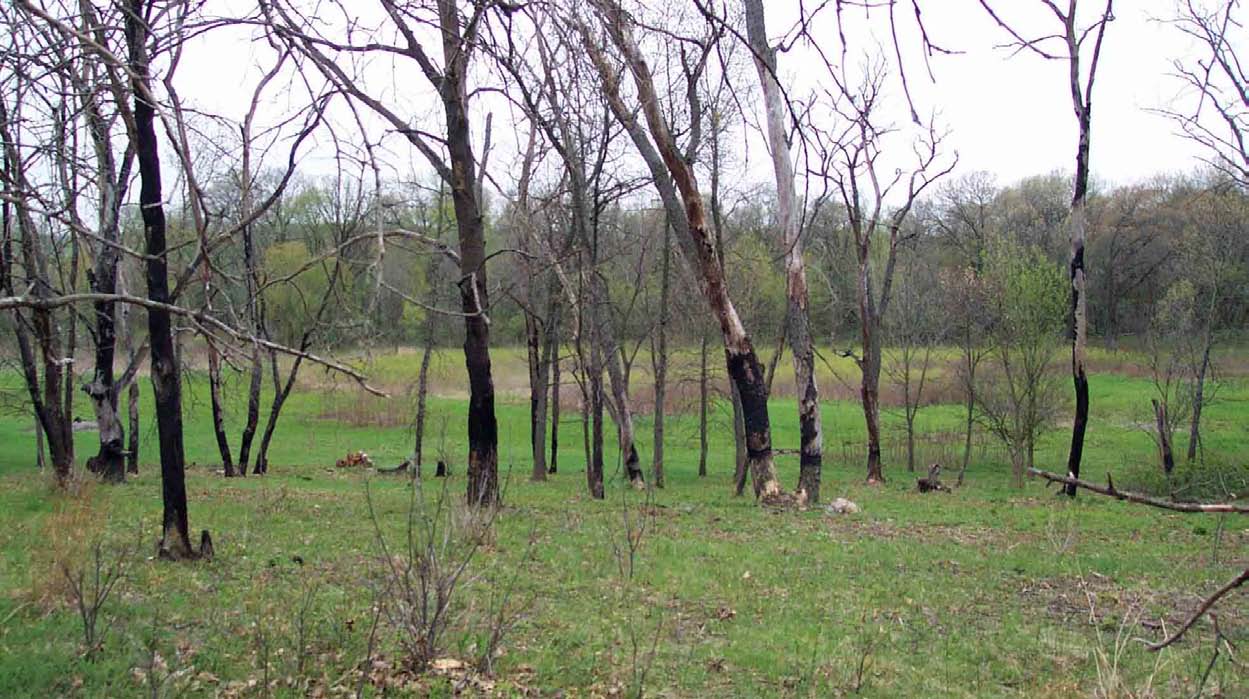 April 2002
​The photo is from the middle top of South Knob to the southeast. Lots of willow is visible in the Sedge Meadow beyond the standing dead cherries on the south side of South Knob. The willow was thick enough that fire did not carry well through the Sedge Meadow, so many of the willows were not top–killed and were able to produce leaves without first resprouting from the roots. 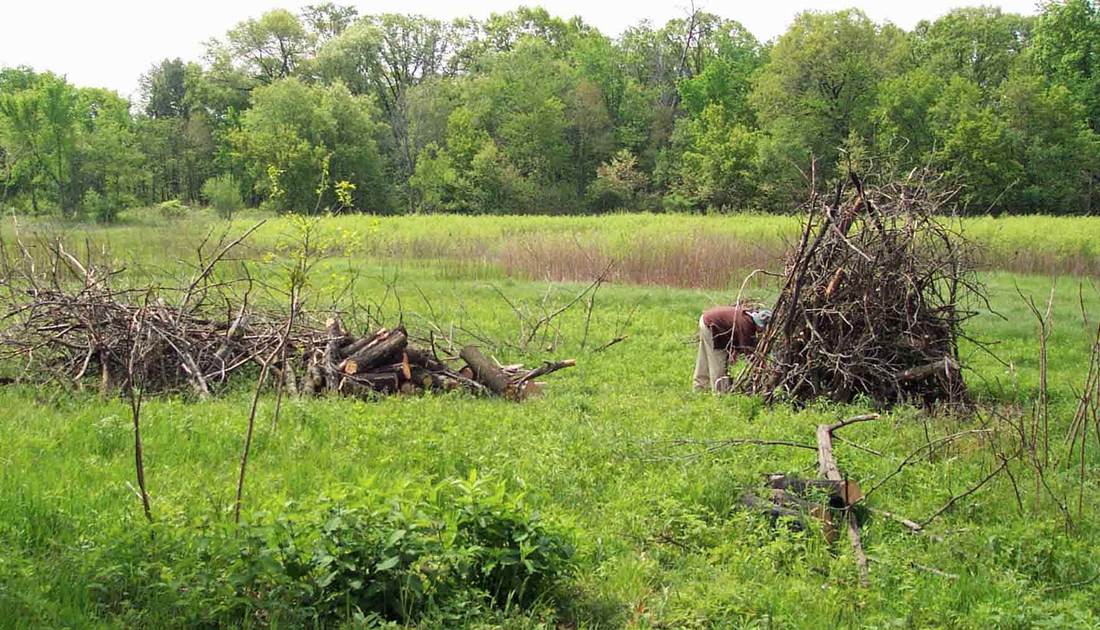 May 2002
​This photo was taken at the south base of South Knob to the southeast with brush pile #5.4 and its feeder piles. This area was our first seed source for Silene stellata so it was good that we minimized the burn scar here. The willow area was large. The tree line is East Woods and Red Head Savanna. You may want to refer back to this early photo to compare with several others which look south from Burn pile #5. 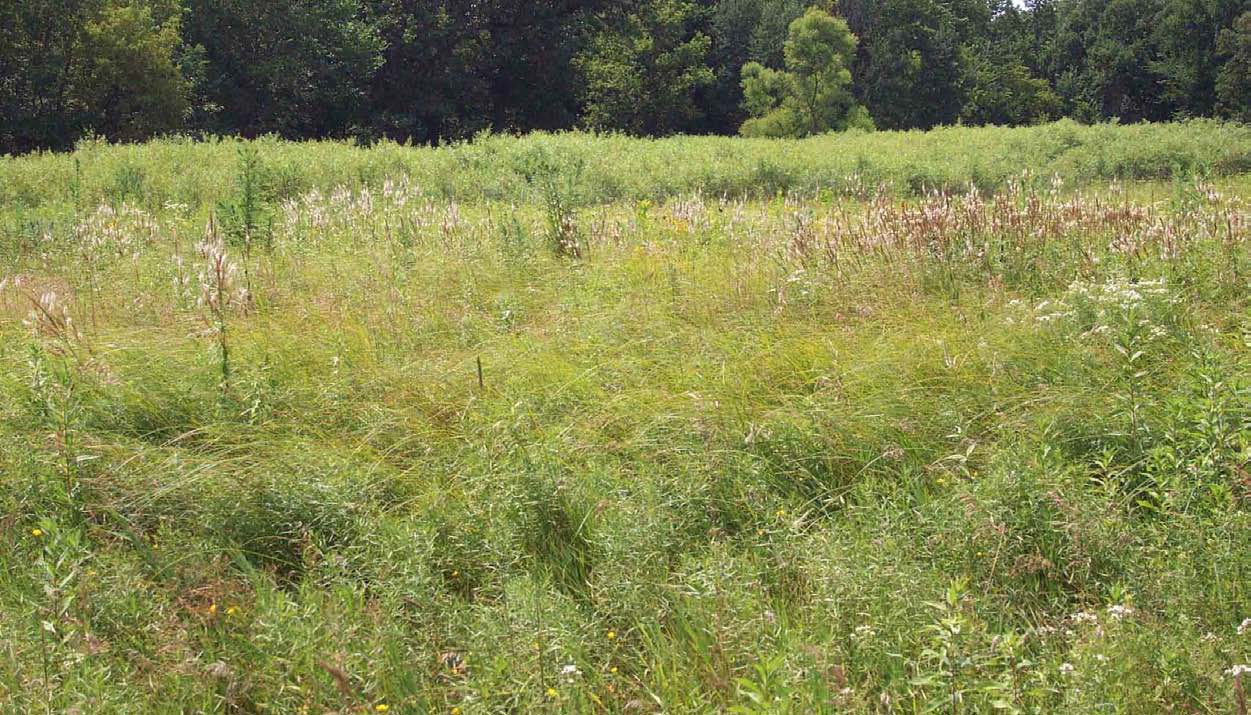 July 2002
​This photo of the sedge meadow was taken from the old 2-track looking toward the southwest. Note the large willow tree (lighter green) in the center background and the “wall” of new slender willow growth beyond the foreground sedge. Yellow blooms in the foreground are birdsfoot trefoil. 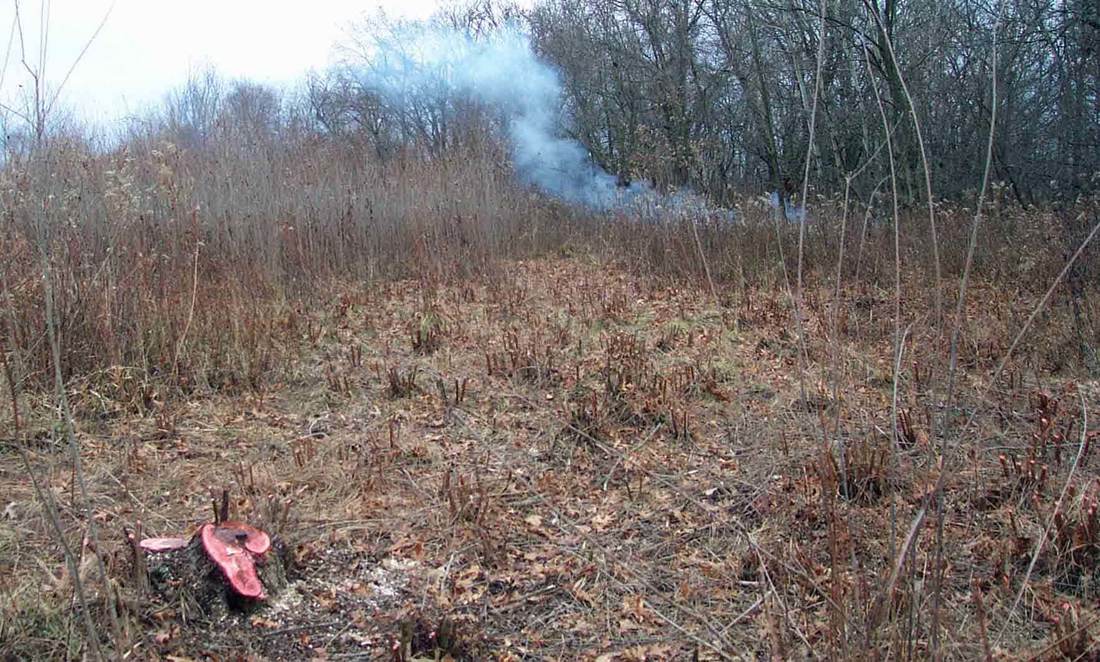 November 2002
​This photo is of the willow area looking east from stump of large willow seen in the previous photo. Ron Ingraham had the honor of applying the chainsaw to this large willow. Smoke is from burn pile location #10 which was used primarily for burning willow. This
stump is in a slight depression which since 2008 often has standing water. 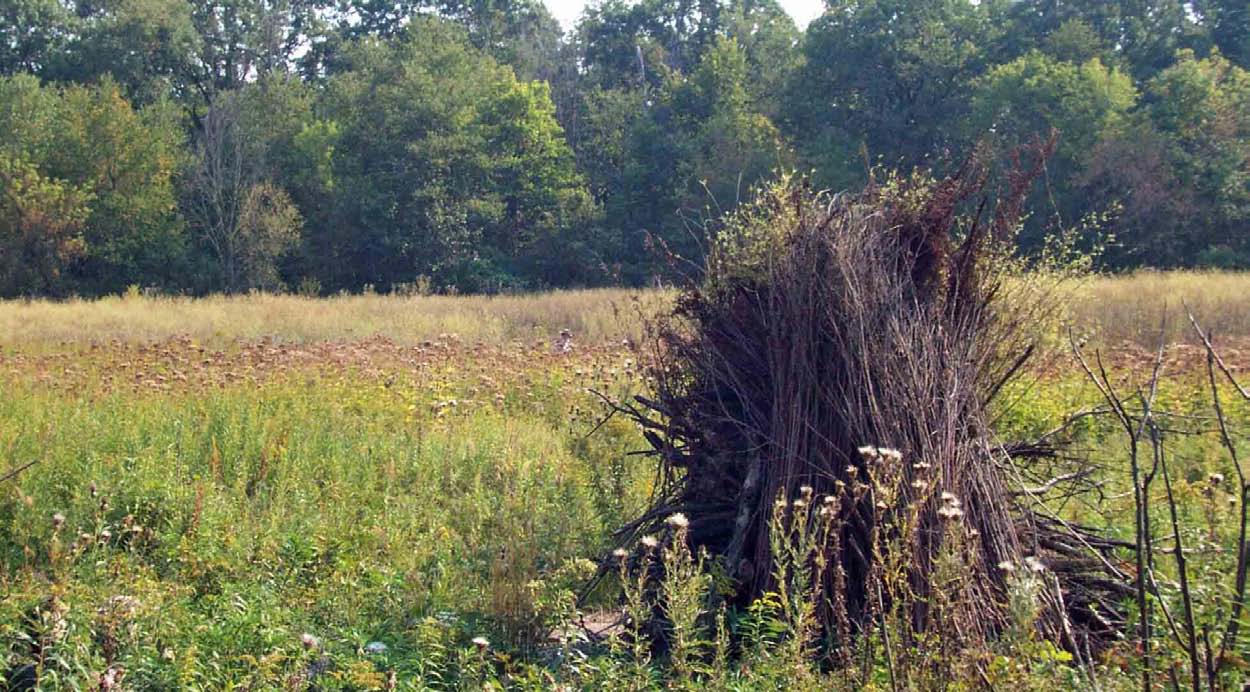 September 2002
​This is an early burn pile #5 of willow looking south across the Sedge Meadow. Hank is barely visible in the thick willow south of the
Joe Pye. Compare this photo of the view of Red Head Savanna with this same view south towards the Fen Unit in 2003, 2005. 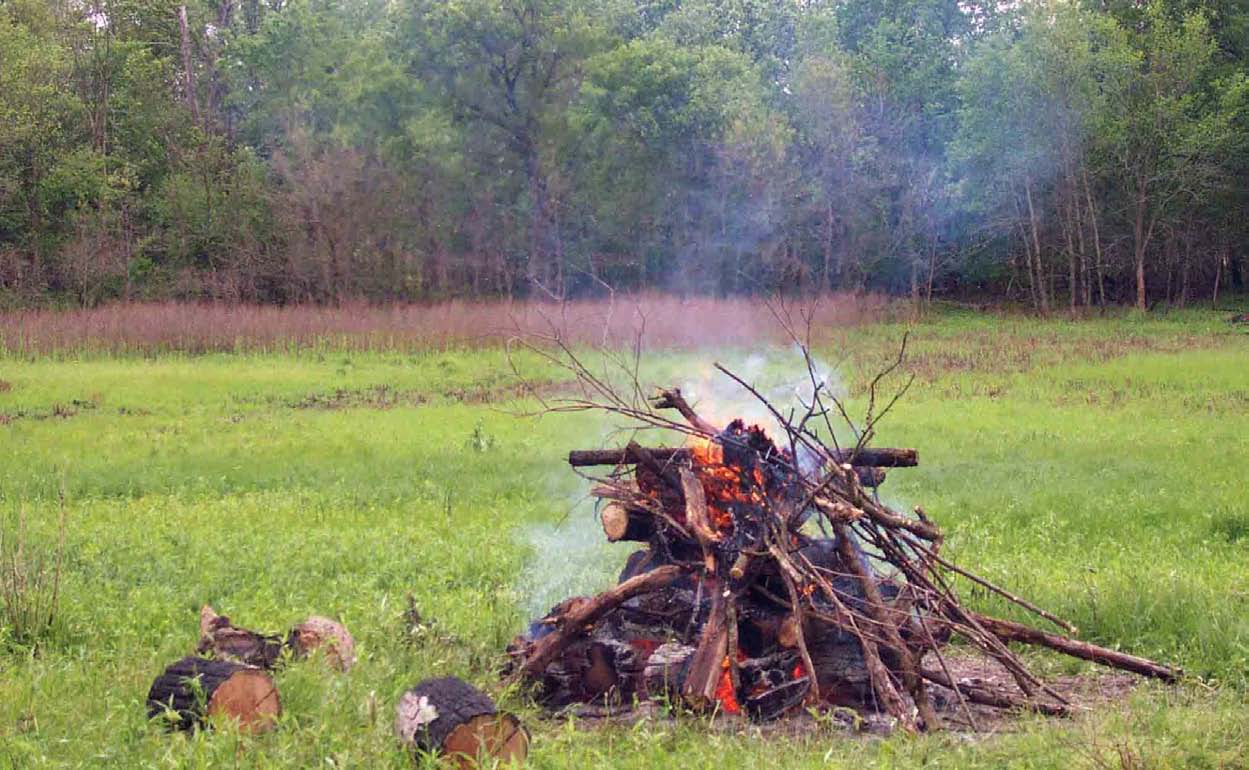 May 2003
​During 2003 we removed more willow. This picture shows all that is left and it has been top killed by prescribed fire. However it will
still have to be clipped and painted when it resprouts; burning does not kill it. You can also see some of the dead stumps of willow. As in 2002 you can’t see the Fen at all. 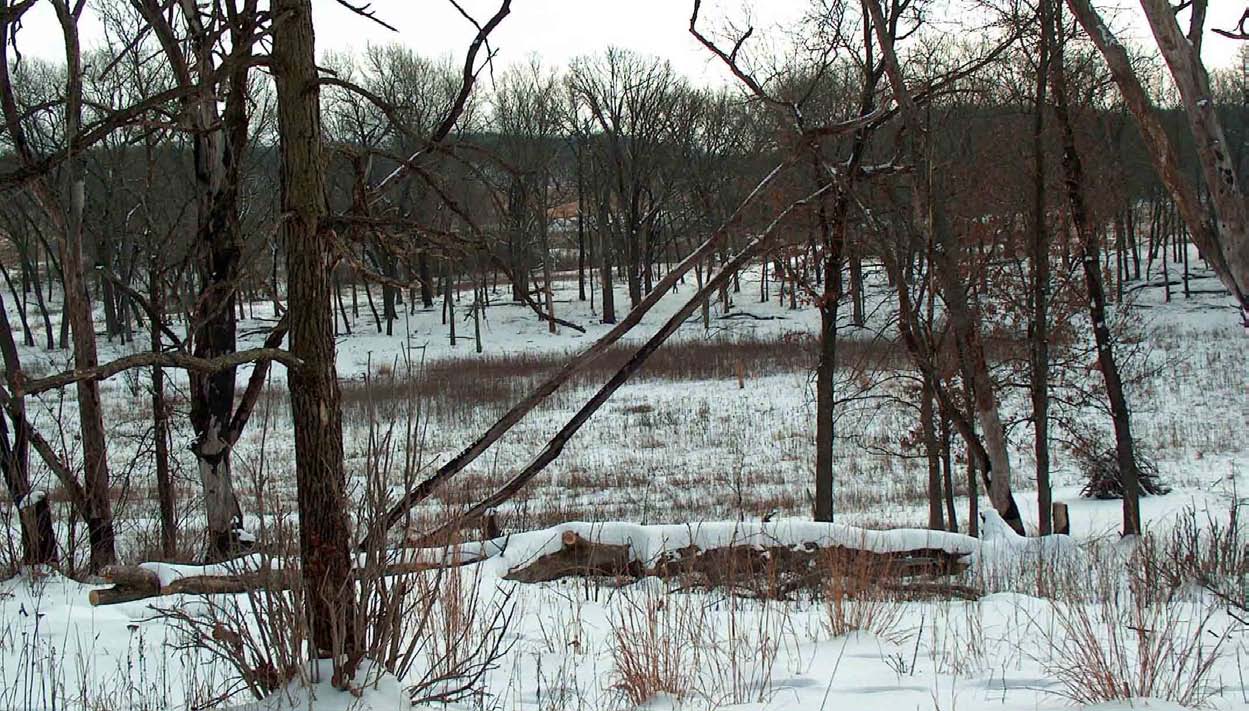 February 2004
​The geoboy forestry mower worked in Big Woods the first two weeks of January 2004. So in addition to picking up dead fall trees and limbs we also began clearing away geoboy residue. Looking at the Sedge Meadow from the top of South Knob you can see the remaining willow, brush pile #5.11 at the right, and girdled cherries on the ground. Look closely at Red Head Savanna and huge amounts of brush are gone. If you squint, you can see the little bluestem on Hamill Winter through the middle of the trees. This was not possible in 2003. You can review all the views south across the Sedge Meadow to see how dense the trees used to be. Note also that the amount of willow has been greatly reduced.

February 2004
​Al Meier and Hank Hartman (far left of photo) with piles of cut willow to add to the burn pile #5. You can go back to previous years and see several earlier photos of this burn pile looking south across the Sedge Meadow. All the willow to the right is gone. 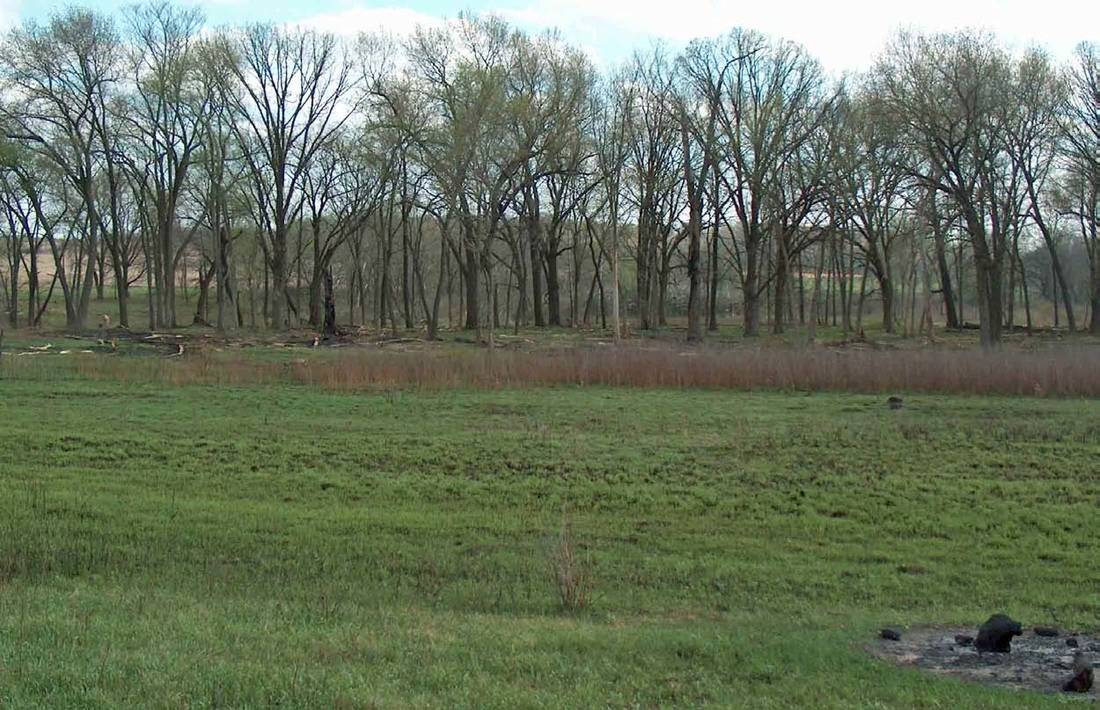 April 2004
​After prescribed fire in Spring 2004 the willow looks dead, but it has only been top killed. Now you can see the Fen as well as Hamill Winter. You can also see forestry mower slash between the willow and the trees. Burn pile location #5 is at the lower right of the photo. 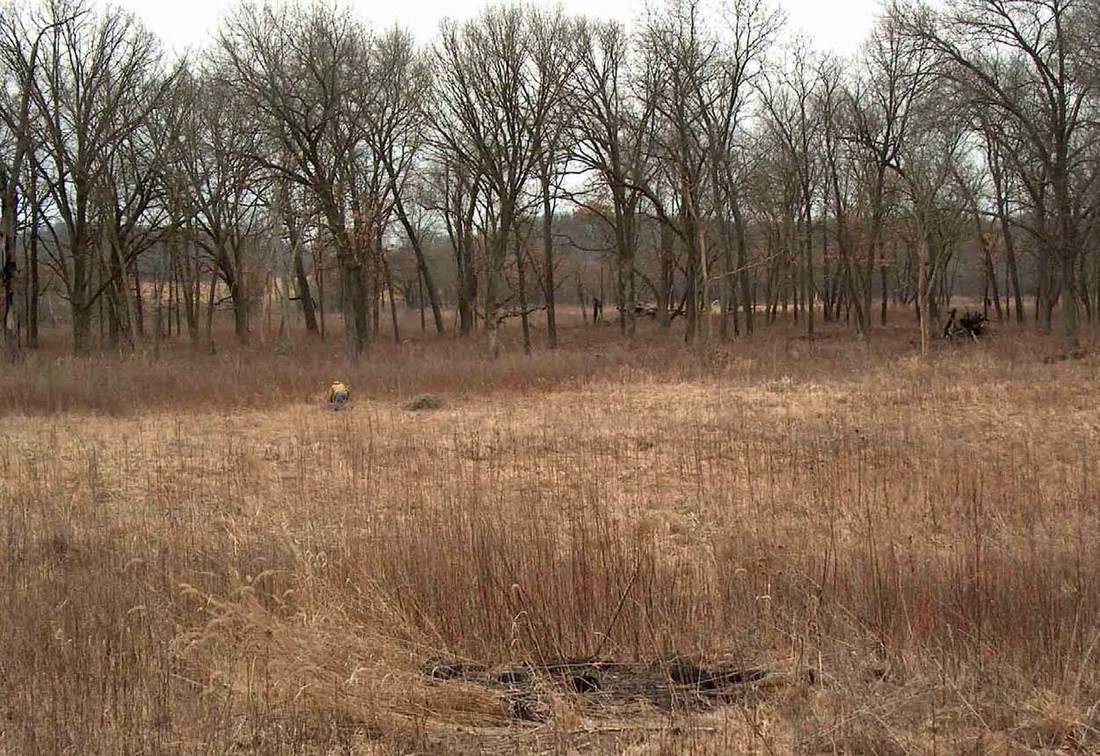 February 2005
​Hank is cutting and herbiciding willow to add to the burn pile #5.12. 2005 was the last year you could actually see willow. In 2012, we are still killing isolated willow resprouts as we sweep the area for birdsfoot trefoil. But this is the end of the willow campaign. Other problems which we are still addressing across the unit include gray dogwood clones, aspen clones, multiflora rose and honeysuckle.
​Back to Big Woods Table of Contents