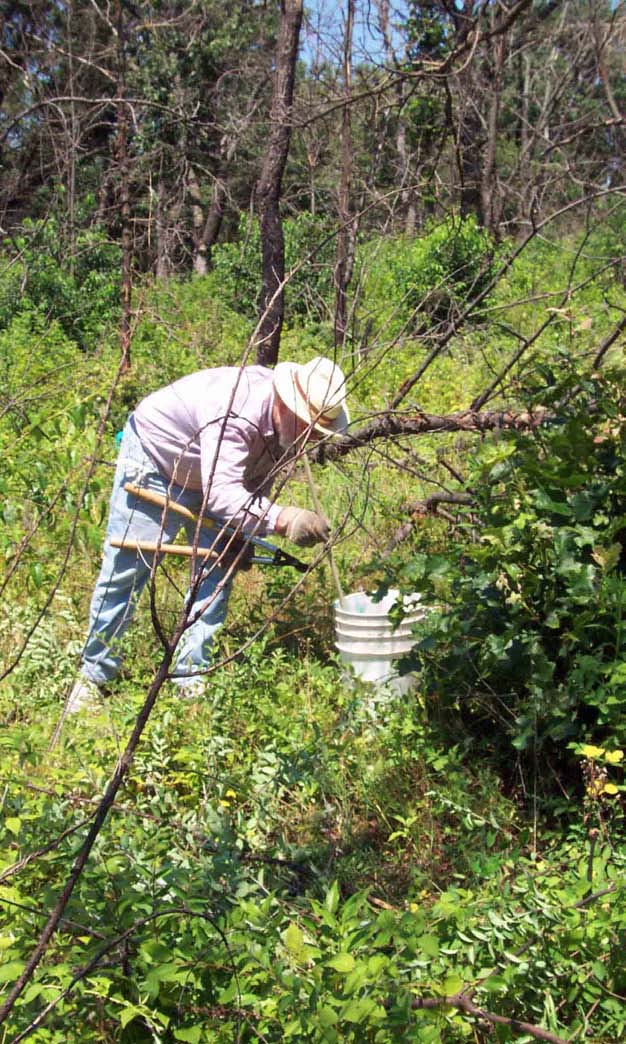 July 2001
​This is the earliest photo of any Hartman work on Big Woods Unit. Hank is cutting and herbiciding cherry resprouts on the east
end of the top of South Knob. The photo is taken to the west. When Susan and Bill Kleiman arrived at Nachusa in 1993, Susan spent
days girdling cherry trees on the Big Woods Unit. In all the photos in this section look at the number of dead standing cherry trees.
South Knob and North Knob are covered with oak grubs. Some years the prescribed fire really knocks them back and other years a
patchy burn allows them to increase in size. We think all the knobs are actually oak grub barrens if there is regular fire. It is
possible that the grubs are hundreds of years old. 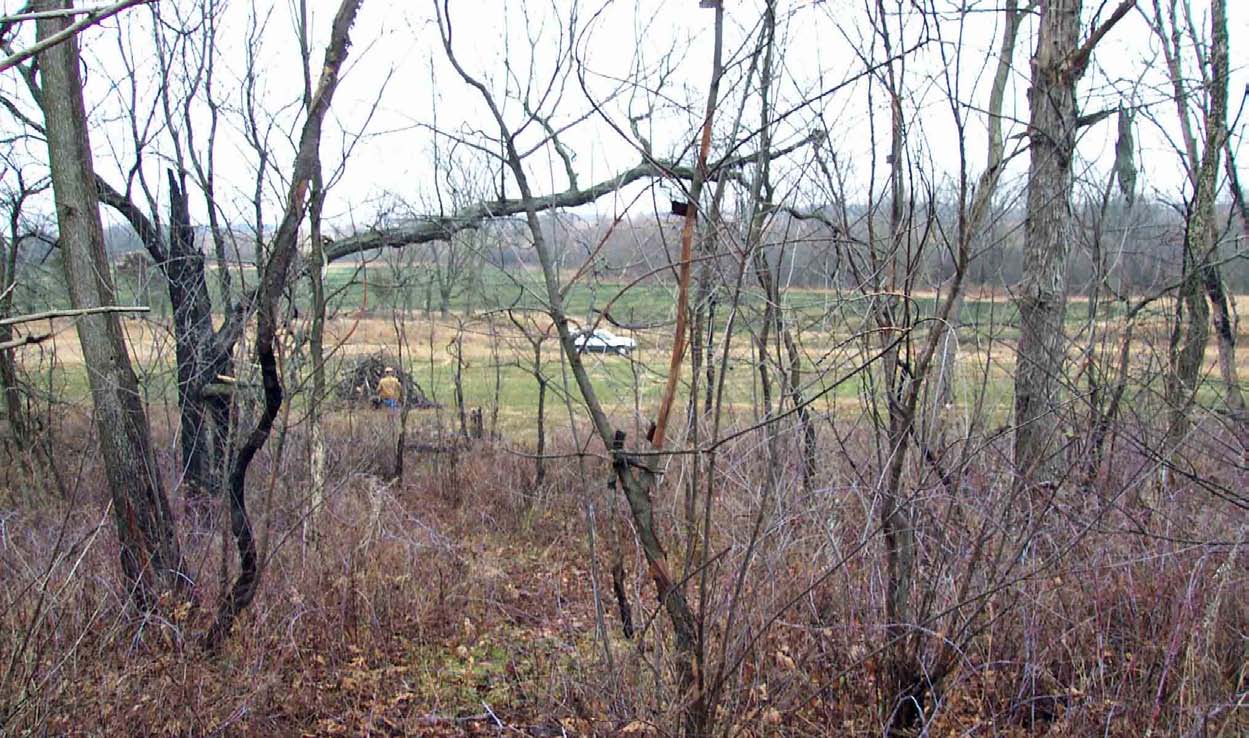 December 2001
There was only one possible path up the south side of South Knob when we began. I am standing at the large shagbark hickory on
the east face of South Knob. This photo to the east is the beginnings of a first path from the east up to Whichway oak. We
continue to take photos at that point in a 360 degree rotation. Jeep is at Old Ditch Crossing. Wade Bottoms in the distance is totally
green in December; must be pure brome. Hank is standing by burn pile #4.1. 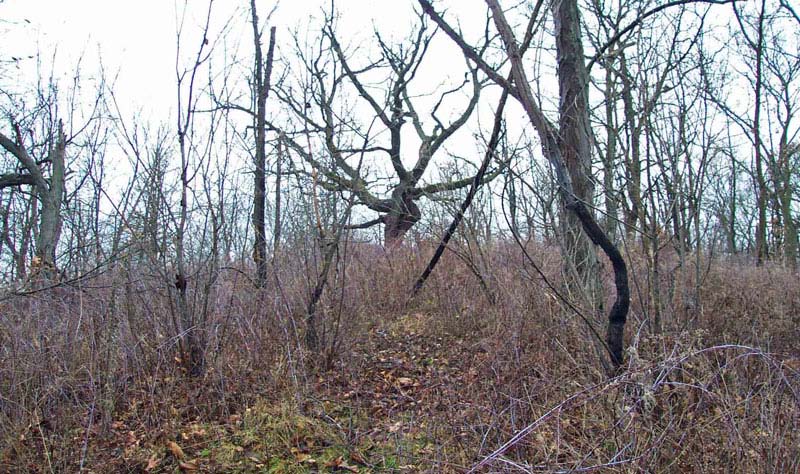 The oak grub next to Hank in the first photo could actually be the medium size oak west of Whichway in the next two photos. Most
of the grubs on top of South Knob have not been impacted by recent fire and currently are fairly large. 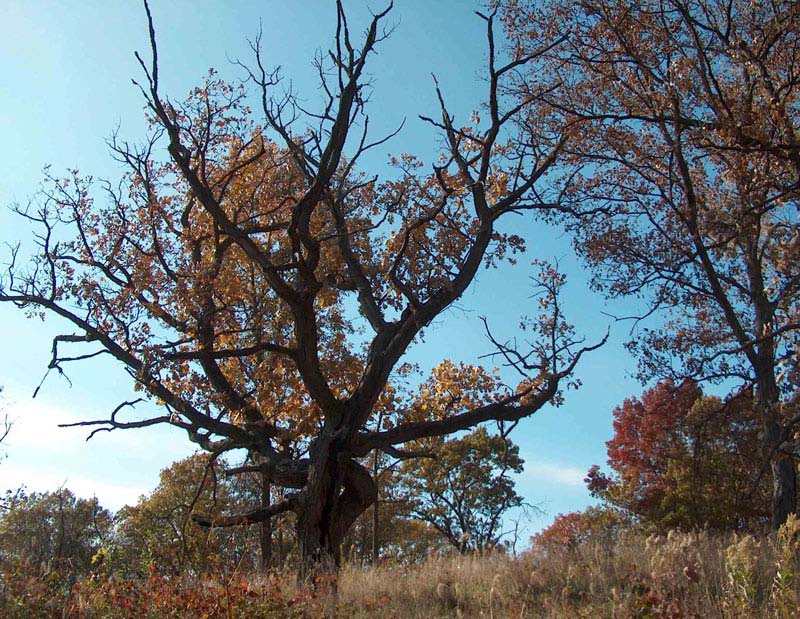 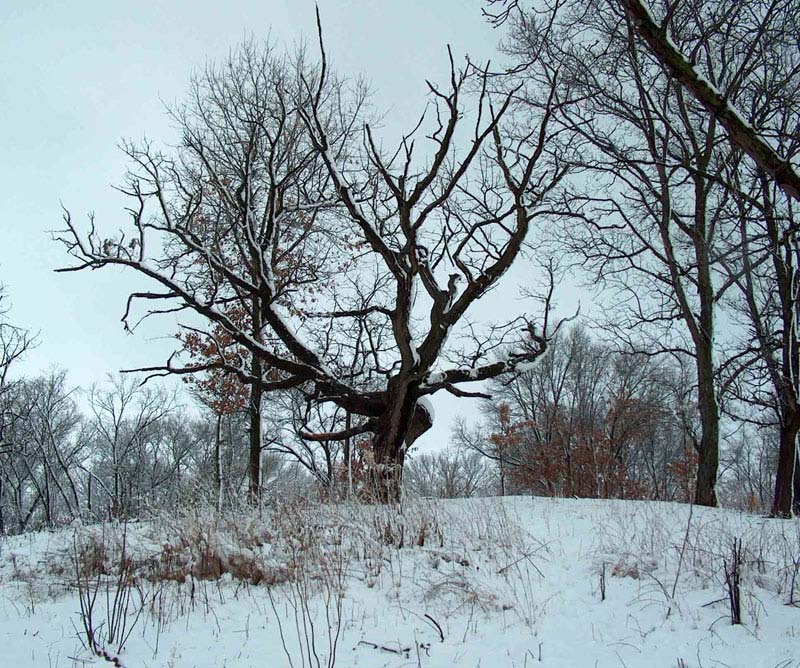 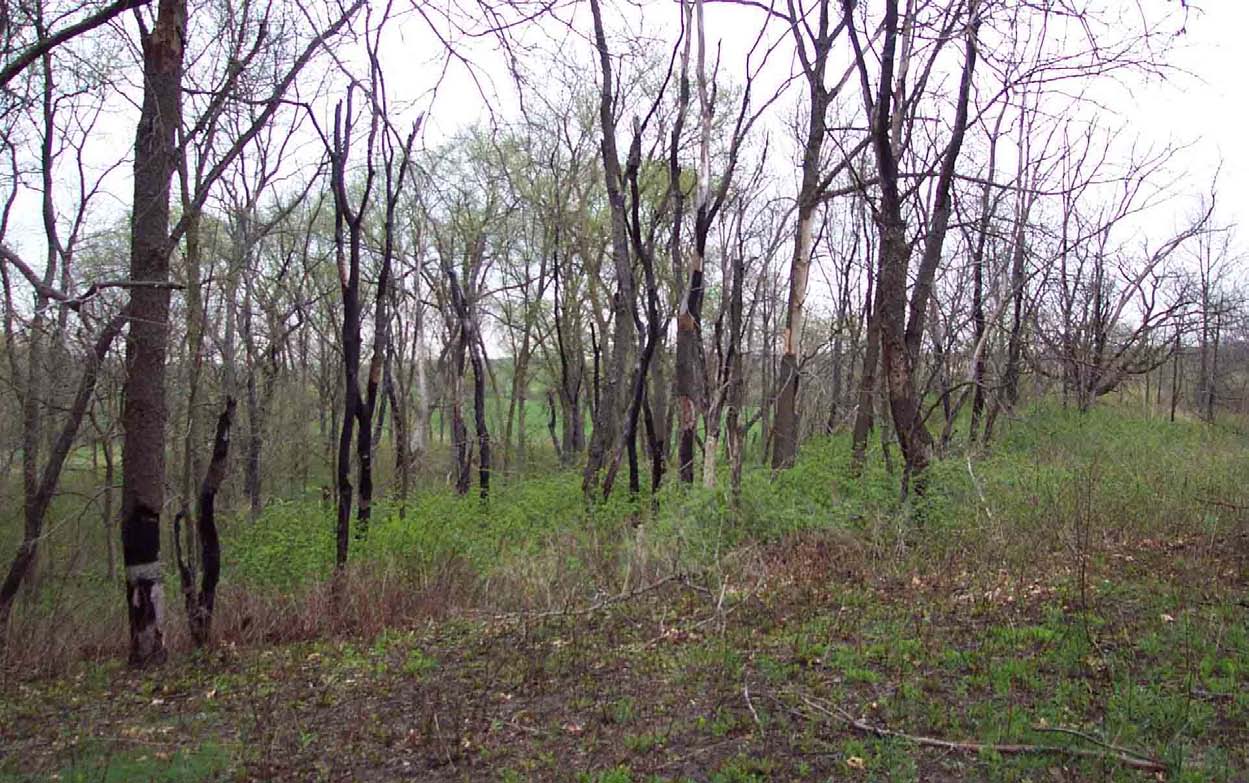 April 2002​
Photo from the west end of the top of South Knob looking to the east. This is typical of South Knob problems; dead cherries to fall
down and thick rubus (wild blackberry and raspberry). Look for Whichway tree at the right hand side of the photo. Also in the next
four photos you can see the oak grubs turning into trees and they start to block the view of Whichway.

Oak tree trunk at left of next photo is further west than was shown in the photo above. We waited for the cherries to fall down;
since they had been standing dead for eight years before we began, they were too unstable to allow us to cut them. In 2004, the
forestry mower pushed over the dead cherries on this north side of South Knob. A lot of volunteer hours went into stacking them
on brush piles and burning them. Al Meier was especially helpful with this work. See Brush Removal Section for more details. Still
plenty of rubus here in 2006. Whichway tree is now clearly visible. 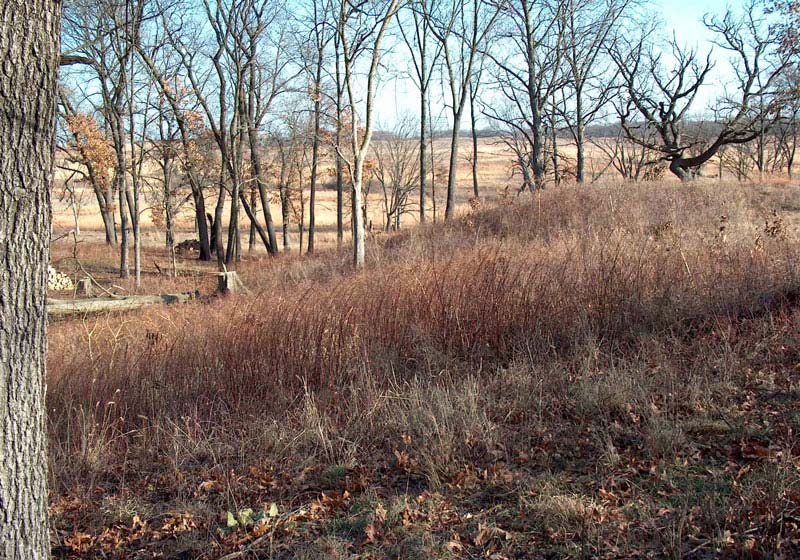 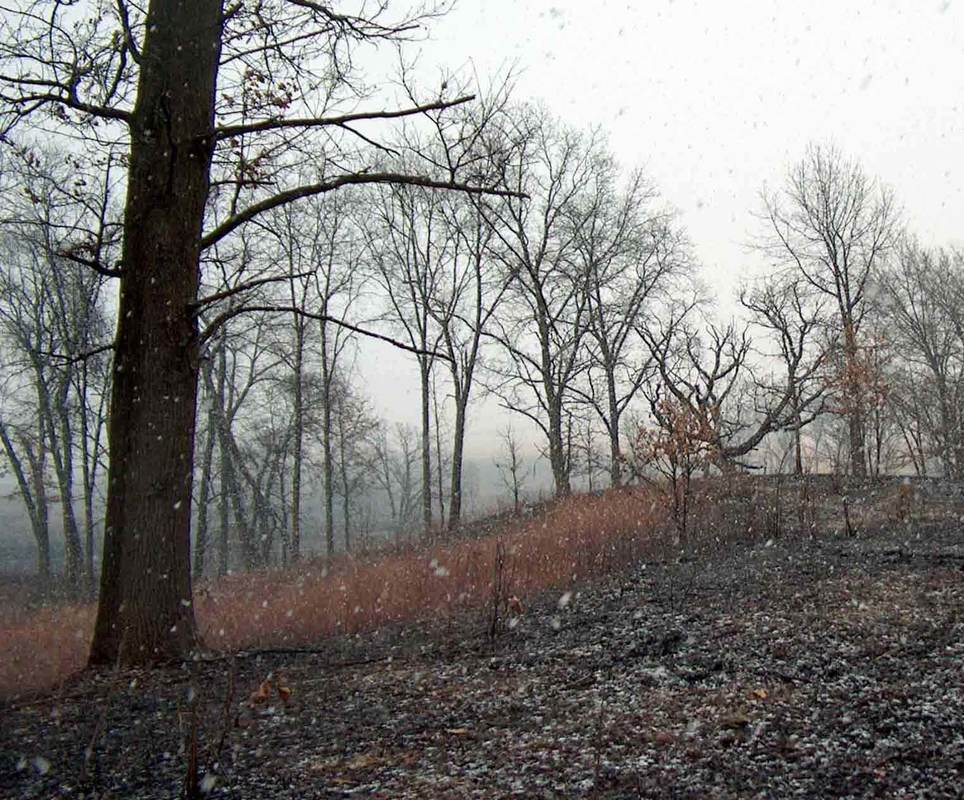 April 2011
Standing just a little further west so that now you can see the entire oak tree at the left. The 2011 prescribed fire was just days
before this snow storm. There is less rubus now and part of what appears to be rubus is the beginnings of a nice hazelnut thicket.
We need to find a low effort way to put a fire break around the hazelnut so they can become large enough to resist fire top kill.​ 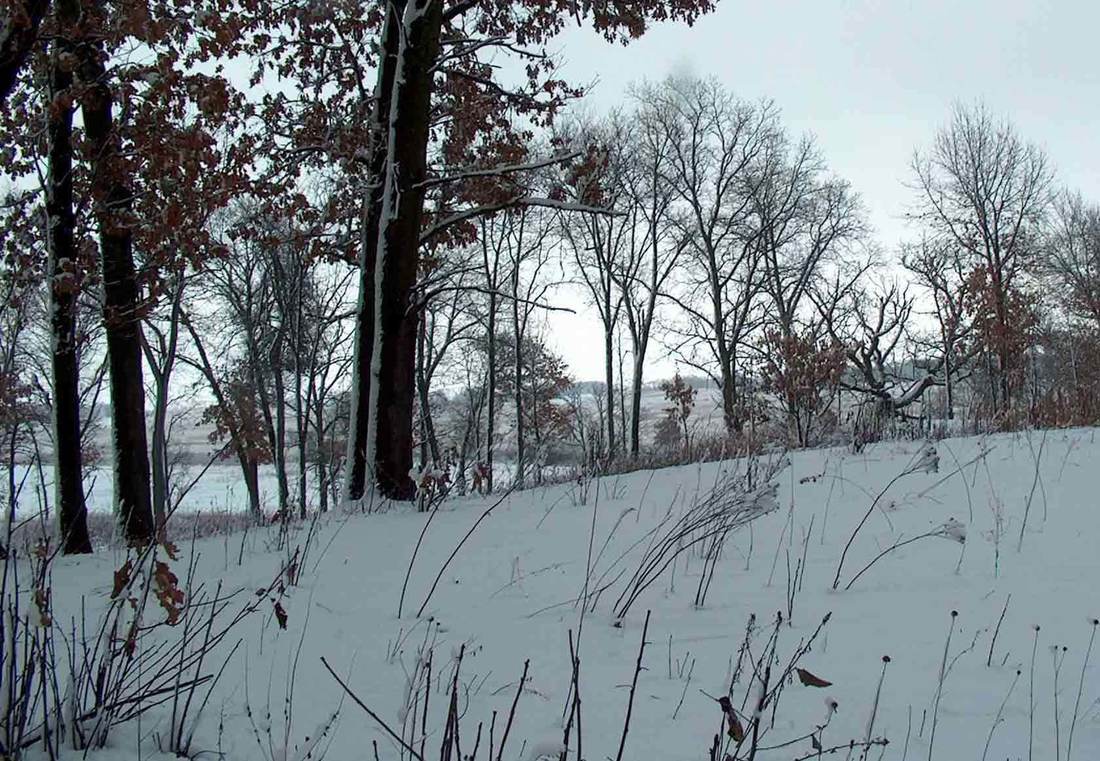 February 2012​
Photo is from further west; largest trunk on left is same oak tree as in previous photos. For details on seeding of South Knob, see
planting plans in Seeds Section. Each year some of the Top Sides Mix is added to South Knob. 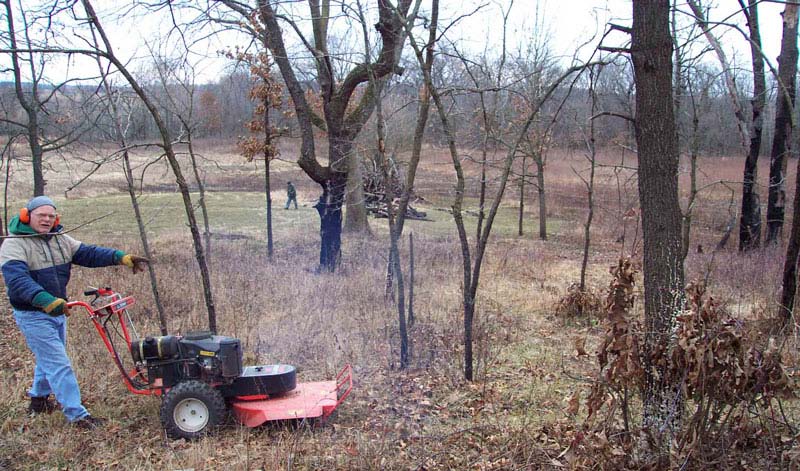 January 2002
One way to reduce rubus is to mow it since it only flowers on second year canes which then die. Mike Adolph was the first person
to run the DR mower on Big Woods. This photo is also an example of a fire top killed oak resprouting as an oak grub. The girdled
cherrys in this photo have been removed. Burnpile #3.1 appears at the east end of the sedge meadow.

March 2003
Al Meier mowed rubus again in 2003. In this photo you can also see the acres of brome to the east and south of South Knob. See Brome Section for details on herbiciding with Poast and overseeding. In the photo below just "above" the DR mower there is a
large bur oak. Look for it in the next photo which was taken two years earlier. 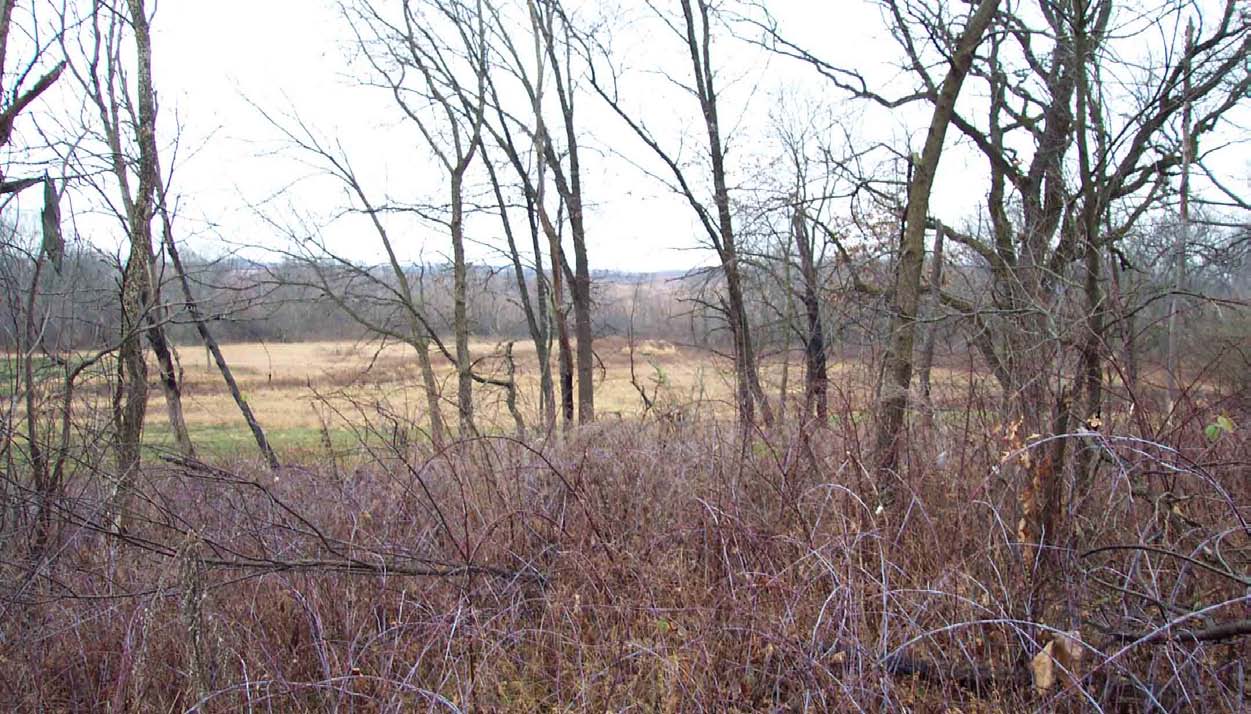 December 2001​
Both of the mowing photos with Al Meier and Mike Adolph do not do justice to the existing situation in 2003. At the right hand side
is the same bur oak seen with Al Meier. The tree is hidden by the center dead cherry in the photo with Mike Adolph.

January 2002​
Photo taken from southeast base corner of South Knob to the northwest. Susan Kleiman does not have fond memories of how
much time she spent working on the girdling cherries project. We still aren’t through (2013) picking up and burning dead chunks of
cherry. The next set of photos is to give you an idea of just how thick the girdled cherries were. Even on top of South Knob there
was only a narrow trail.

April 2002
A view of this area from a different location. Photo point is top center of South Knob looking south at dead cherry, willow in the
Sedge Meadow and the tree line which is Red Head Savanna. For details on eradicating this willow see Sedge Meadow Willow
Section.​ 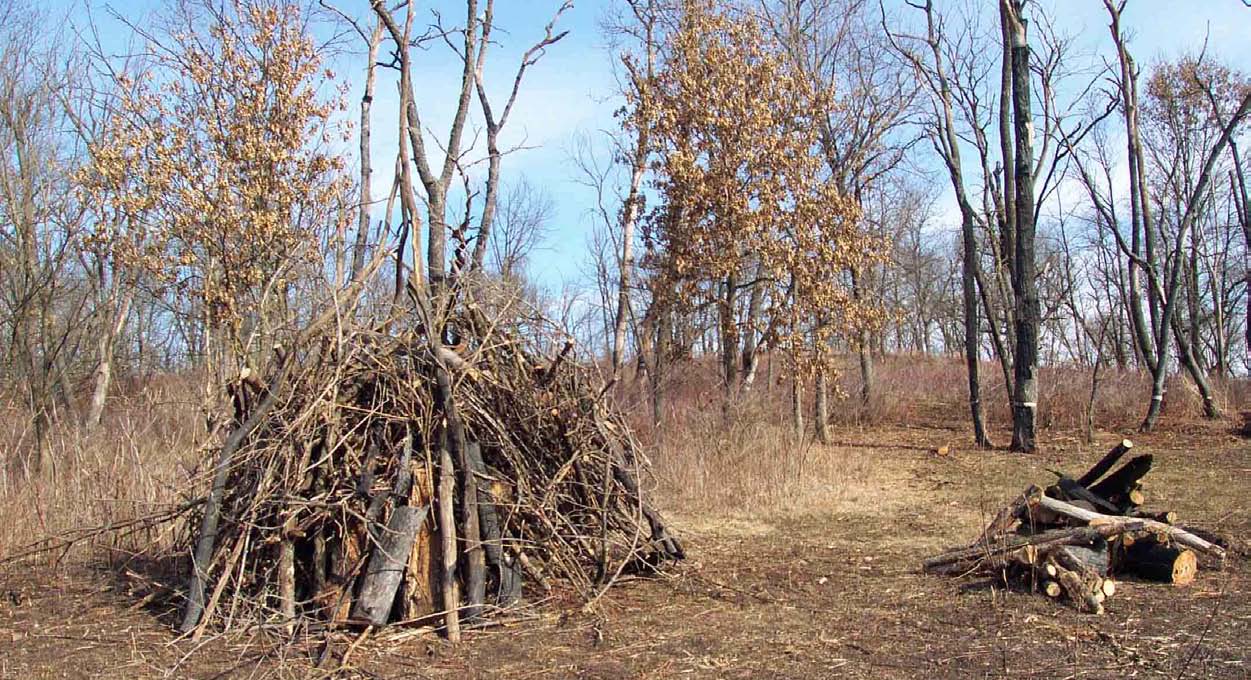 February 2002​
This is burn pile location #5; it is at the south base of South Knob. Photo is to the north. The two medium size oak trees can be
seen at the right edge of the previous photo just showing green leaves. Ideally we always wanted to minimize the footprint of our
burnpiles. We often build feeder piles rather than create a larger fire scar. In Hickory Hollow there is a large bur oak which we
named Hitchcock because it allows us to quickly reference that specific location. Hitchcock is visible from lots of different angles
and locations. See him in this photo?? 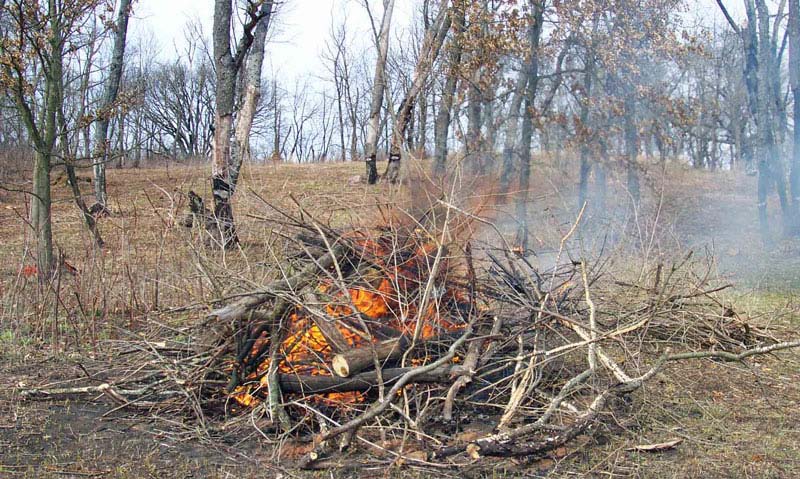 March 2002​
Same location, same twin oak trees. Hank ran the DR mower over a lot more rubus. Burn pile is shorter; Hitchcock’s crown shows
up on the other side of South Knob behind the large dead cherry. 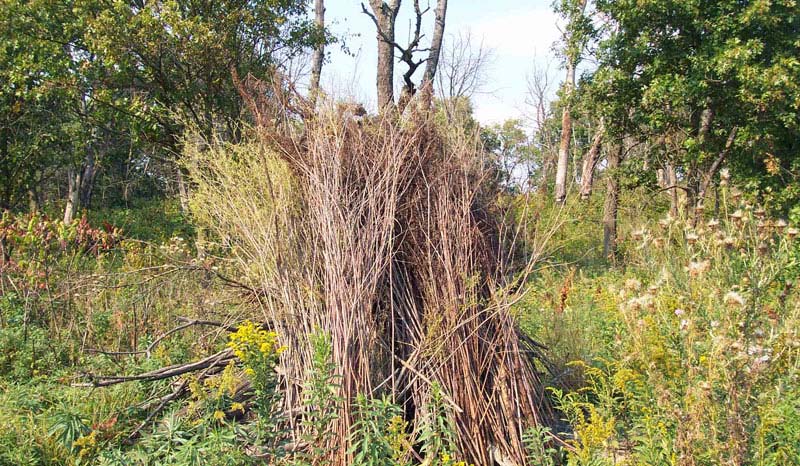 September 2002​
The other major project we began in 2001 was clearing the Sedge Meadow of willow. Burn pile #5 was also used to burn about half
of that brush. The Sedge Meadow Section has photos taken from the north side of the burn pile looking to the south at the
Sedge Meadow and Red Head Savanna. 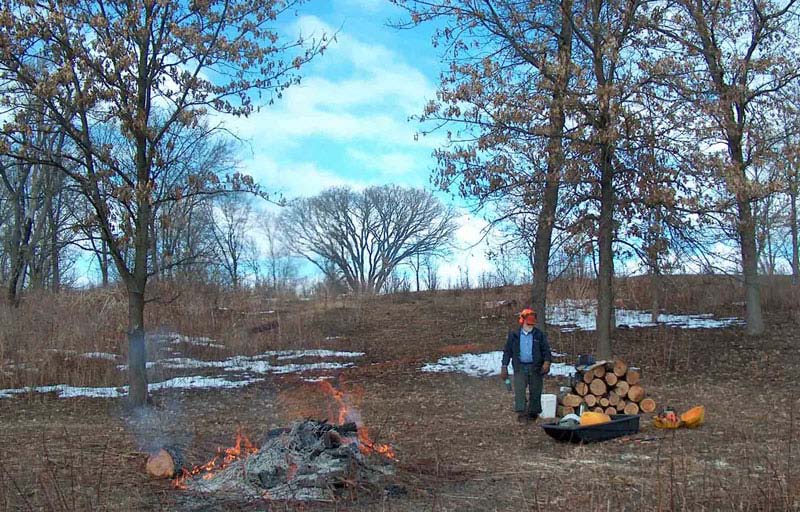 March 2010​
Burn pile #5 has seen a lot of activity in the past eleven years. It has been burned 23 times and is still in use. There is still at least
one dead cherry to remove. It’s at the left edge of the photo. Hitchcock is now very visible. 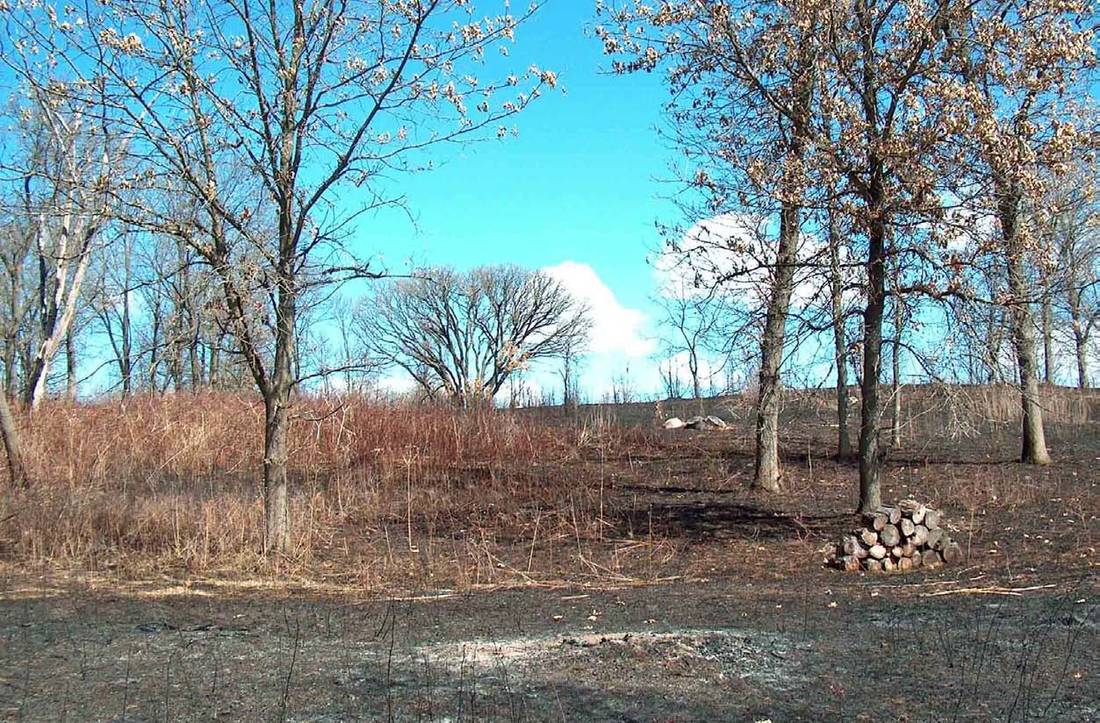 April 2011​
The dead cherry is still there at the left edge of the photo. The twin oaks are much larger than in 2002. Rubus is essentially gone
in the right half of the photo. The patch of stems at the right edge behind the oak trunk is actually a hazelnut thicket. We decided
to quit using the DR mower because it is too much of a hassle to avoid hazelnut, oak grubs, viburnum, etc. There are hundreds of
hazelnut stems in dozens of locations on the Big Woods. 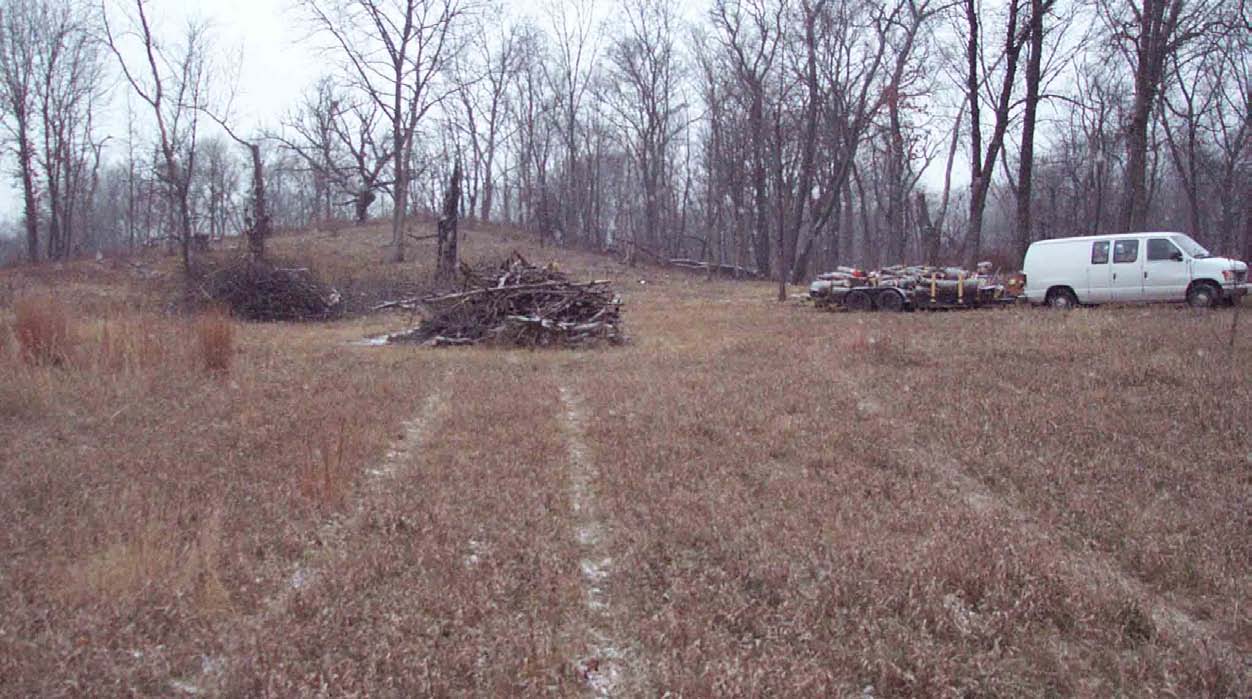 December 2003
Photo taken from the Old Ditch Crossing looking west at entrance to Hickory Hollow behind the Mathis trailer. Except for a few
clumps of little bluestem and some dormant birdsfoot trefoil, the vegetation is brome. Whorled milkweed and short green milkweed
have colonized this area quite nicely. This is burn pile location #4 with feeder pile to the left. John & Chris Mathis had a wood
burning furnace. They contributed greatly to cleaning up South Knob by picking up and hauling away cherry. Hitchcock is at the
west end of Hickory Hollow behind the Mathis van but you wouldn’t be able to recognize that.​ 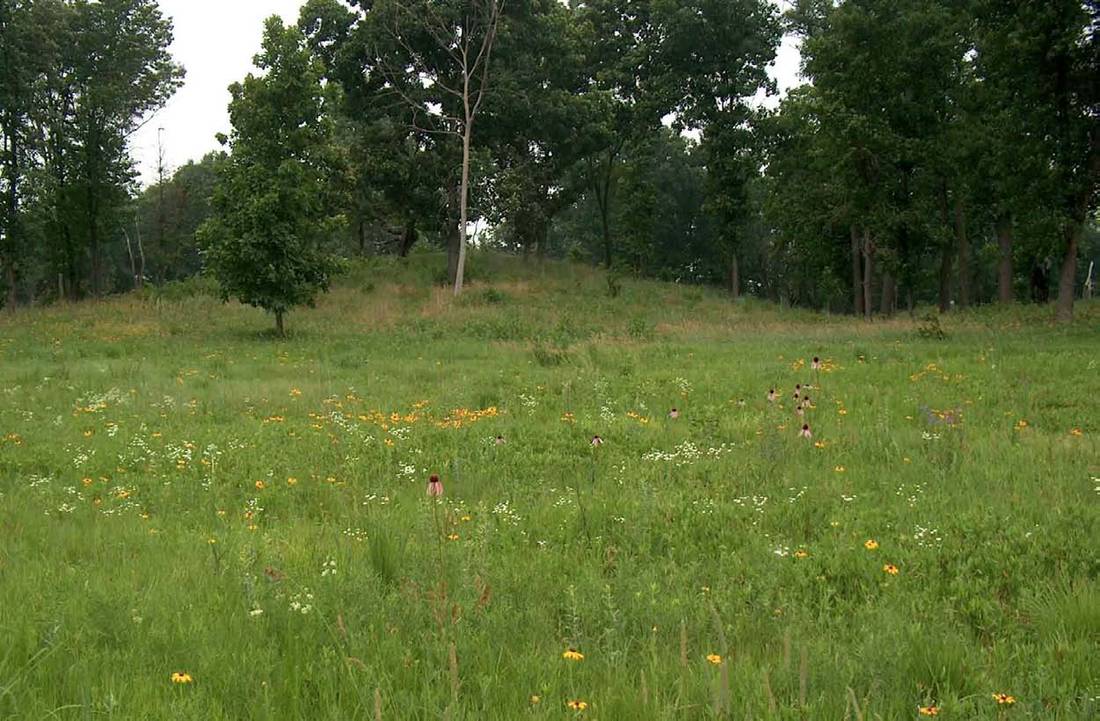 June 2007​
Asclepias verticillata and Aristida purpurascens were the two plants which early on began pushing out the brome in the south field.
Notice that plants other than brome grass are popping up by 2007. Whichway Oak is visible on top of South Knob. The foreground
tree at the east base of South Knob is a hickory. In the next photo (February 2012), look at how much larger it has become in five
years. 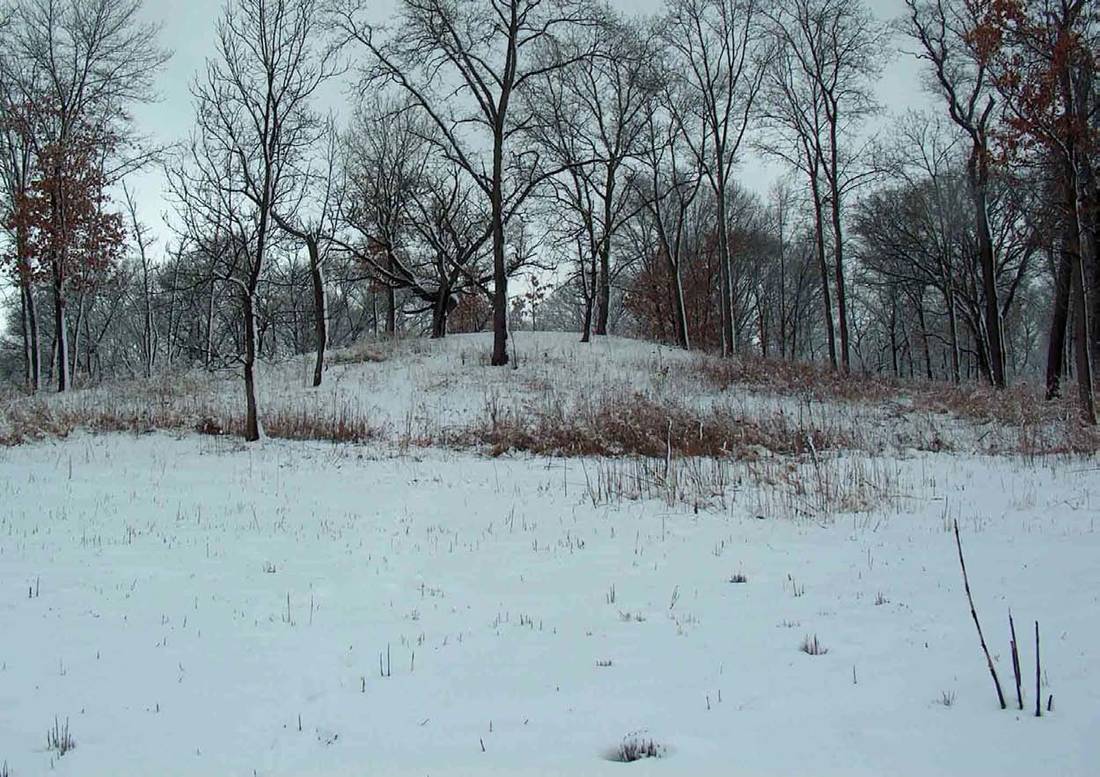 February 2012​
Burn pile #4 was officially retired in 2011. Nothing but oak and hickory is left within its range. There were monster feeder piles for
this burn pile location. Not the vegetation right at the east base of South Knob but the area of stems just east of that is the remains
of the burn pile. Now you see the crown of Hitchcock in the distance on the right. 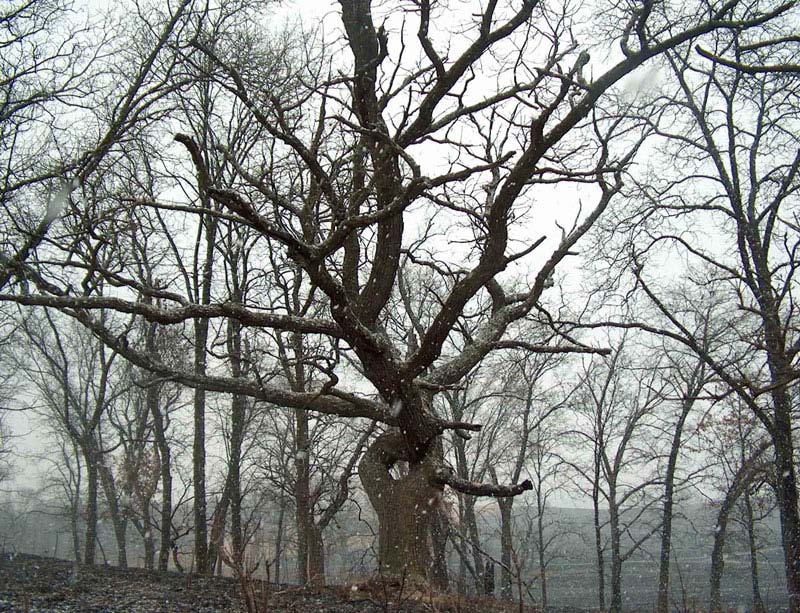 April 2011​
Everyone loves the WhichWay oak.

​​Back to Big Woods Table of Contents