May 2007
The Triangle lies at the Northwest corner of Big Woods. This photo shows the entire Triangle area after it was mostly cleared. The north end of the Triangle is at the left of the photo at the tree line which is the unit boundary and also the Ogle/Lee County Line. The East Ditch and the West Ditch merge at the right just before the large cherry tree on the right side of the photo. See the bulldozer photo in the Ditch Section for the same cherry tree looking south to north. At the left on the side of North Knob are black oaks which have died from oak wilt. On the east side of the Triangle in the open area is the small oak tree which appears in the next set of photos. This photo was taken after a burn where North Knob did not burn but the area east of North Knob did burn, thus the unburned little blue stem in the foreground.

February 2002
The photo was taken at the 2-track east of Point 18 on the opposite side of the Triangle from the previous photo. You can see Norris the large white oak on the top of North Knob to the west. No work has yet occurred in this area since we took over the Big Woods Unit. The small oak in the left foreground appears in many of the later photos.

August 2002
This photo is in the same location of the thick brome just east of the East Ditch again looking west towards North Knob. The top of the crown of Norris is visible in the center distance. The left foreground has the small oak totally leafed out.

January 2004
The week after the geoboy work occurred, a big crew created the first version of Brush pile #12. You can see the dramatic change from the photo of this area above in 2002. There is lots of brome to admire in the foreground all around the small oak. Norris is still a landmark although it will finally vanish in 2013 due to old age. 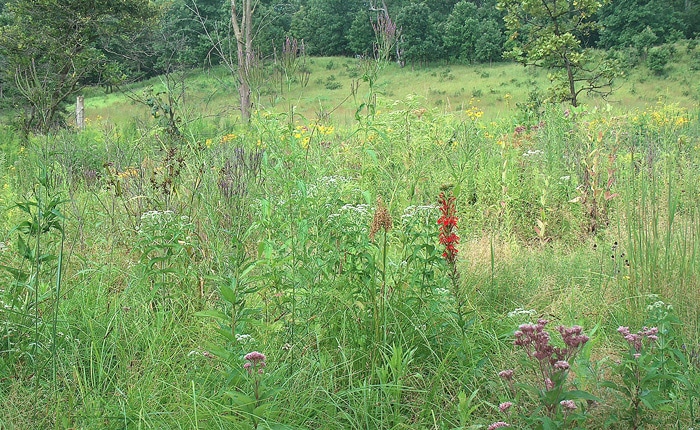 August 2011
This is a closeup of what used to be the brome between the East Ditch and a point immediately west of the small oak. Overseeding here has pushed out the brome seen here in 2004 and 2002 photos. In the distance you can see Middle Knob and part of North Knob. The small oak tree on the right is out in the Triangle. This photo and the August 2002 photo above were taken at the same spot looking in the same direction.

April 2006
The bulldozer which pushed in the Ditch in 2006 left the brush pile shown in the middle of the Triangle in the area of burn pile #15. See Ditch Section for details. This photo is a view looking to the east. The next photo looks to the northwest. The bare dirt is a result of scraping away the spoil pile at the edge of the Ditch and contouring it back into the Ditch. 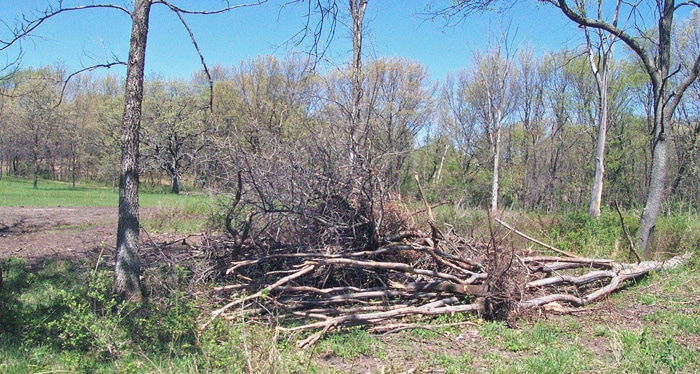 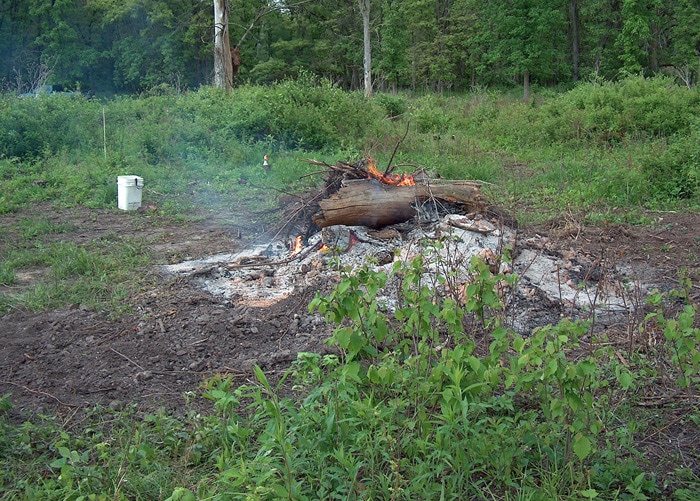 May 2006
We carefully consolidated this brush pile so as to leave as small a burn scar as possible. We had already heavily seeded the Triangle and did not want to lose more plants in addition to those scraped away. See Seeds Section for details. In the photo above, which is looking to the north, there is the wall of honeysuckle which we started taking out in 2007 and south of burn pile # 15 there is a wonderful clump of hazelnut.
​ 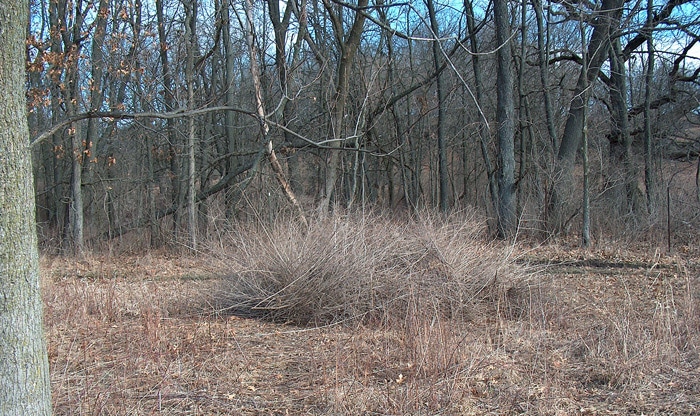 March 2007
This is burn pile #12 in March 2007 with some of the honeysuckle from the Triangle. This is the brush pile originally created with brush from the geoboy. It is at the north end of the Triangle right by the 2-track / fire break at the property line / county line. Photo looks north at the neighbor’s property. 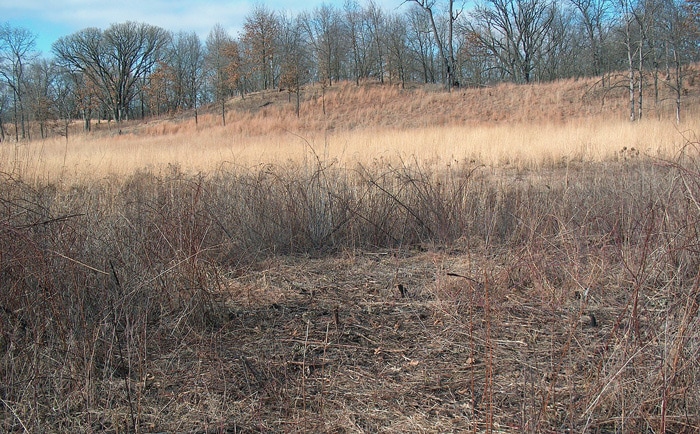 March 2007
The foreground in this photo is one area of the Triangle minus honeysuckle. It has Hitchcock clearly visible in Hickory Hollow, Middle Knob in middle distance and North Knob on the right with oak wilt dead trees. Each of these areas is discussed in other sections. 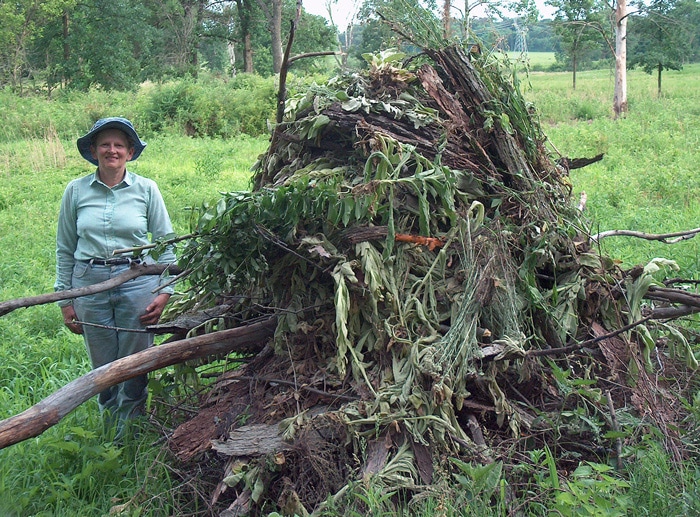 June 2007
We finished the honeysuckle visible in background here in 2007. This is the north side of the honeysuckle which appeared in the
burn pile #15 picture taken in 2006. In the Triangle we still have a large gray dogwood clone which needs to be reduced and there
undoubtedly needs to be followup sweeps for multiflora rose. This is burn pile #12 looking south at the Triangle. We have burned brush at this location 27 times. See Brush Removal Section for more details. Look closely at the opening in the background. The power tower is both visible and far away to the south.

February 2002
This is the north end of the Triangle in 2002, looking at it from the west side. In the background are the Dot/Doug burr oak and the Doug’s Knob plum thicket. The “Y” tree also appears in the panorama photo at the beginning of the Triangle Section. Gene St Louis cleared this area at least once. After the geoboy removed a lot of the big stuff in 2004 and the Byron bulldozer worked in 2006 much of the honeysuckle filled back in. 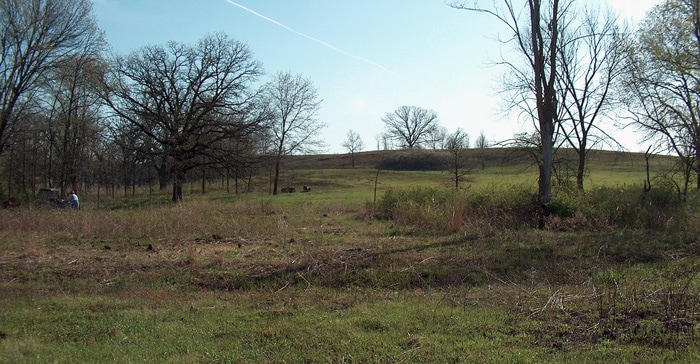 April 2007
The previous photo is before any work occurred in this area. In spring of 2007, we clipped and herbicided as much honeysuckle and multiflora rose as we could. This is the result of the three different clearing efforts. Now you can clearly see the Dot/Doug burr oaks and the Doug plum thicket.

December 2007
This area is wet enough that it does not carry fire well. So this is the photo which shows it in its most open incarnation. After the
monsoons of 2008-2011 it really has a heavy fuel load. The next prescribed fire really needs to burn well here.

August 2008
The Seeds Section contains detailed information about what was contained in each year’s seed mix which went into this area. The first year we created a specific “wet” area mix was 2004. So by the time this photo was taken, plants were well established in this area. 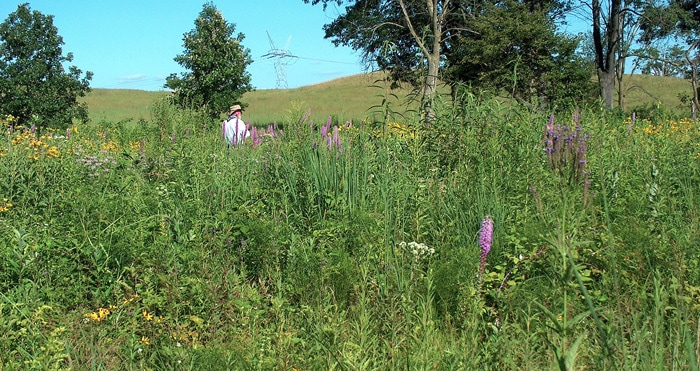 August 2008
Hank is taking photos of the area. 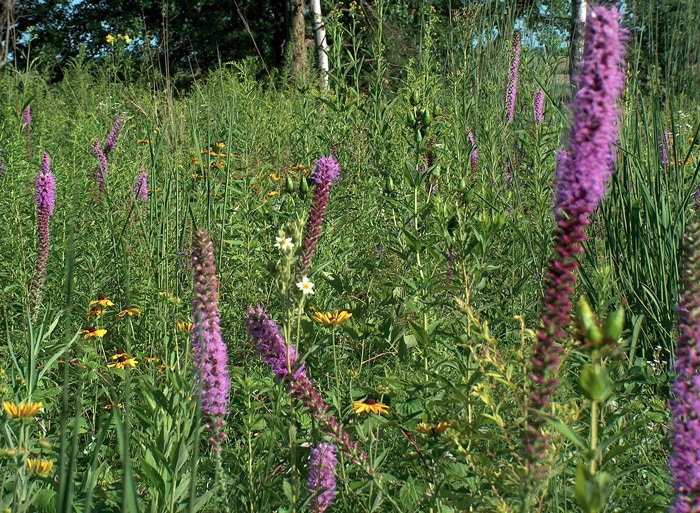 August 2008
How many species can you identify? 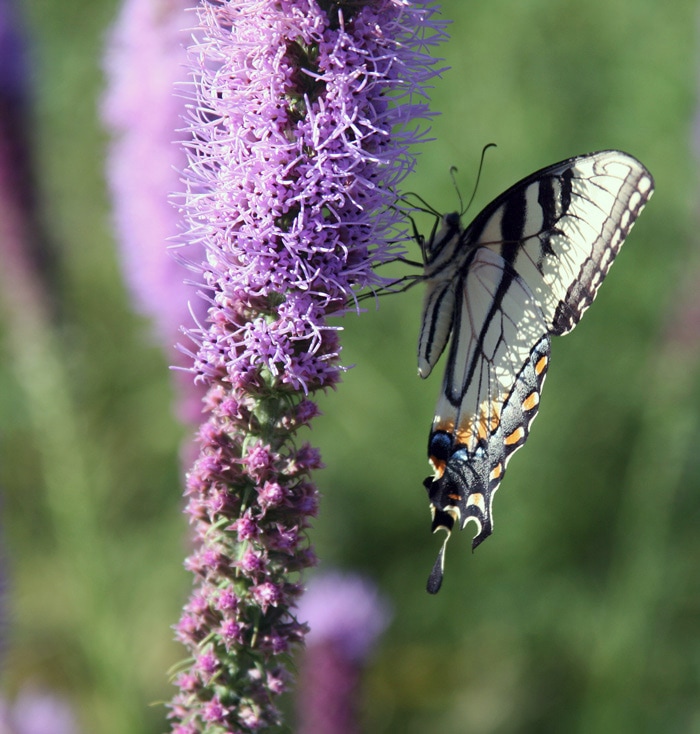 August 2008
​Photo of a bug posing on a blooming lyatris.
​​
​Back to Big Woods Table of Contents