Site conditions:
Location: Lee County, Township 21N, Range 10E, Section 21. This restoration is approximately 52 acres in size. The unit is irregular in shape. The coordinates of the boundary corners are listed below and shown on the map.

​The site is bordered by the Dot & Doug Wade Prairie and Wade Creek on the east. The south border is the Fen Unit. The north and west sides are a degraded heavily wooded area which is off preserve. The north border between points 18 and 19 is the Lee/Ogle County Line. Ogle County is north of the line. The red dotted line marks the unit boundaries. This map is 2007.

2007
The site is bordered by the Dot & Doug Wade Prairie and Wade Creek on the east. The south border is the Fen Unit. The north and west sides are a degraded heavily wooded area which is off preserve. The north border between points 18 and 19 is the Lee/Ogle County Line. Ogle County is north of the line. The red dotted line marks the unit boundaries.
Soil Types: 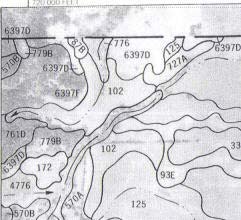 Topographic features:
​The unit is flat to rolling to distinctly hilly. The western half consists of rolling hills, locally called knobs. The knobs are bisected midpoint north to south with a low sedge meadow. The eastern half of the Big Woods Unit is flat prairie with a well defined north-south swale falling away to Wade Creek at the southeast corner of the unit. This swale was ditched at some time in the past for farming purposes. The soil map shown above indicates that the swale originally drained to the west through the sedge meadow. In 2006 the ditch was pushed in and smoothed by the Byron Forest Preserve bulldozer operator and his bulldozer. In 2011, the ditch flow was partially diverted back to the west. The south corner of the unit, boundary point 6 on the photo, is a wide area of creek flood plain which narrows to non-existent at the northeast point on the creek boundary, point 7 on the photo. Two-track/fire breaks are located along the north and west boundaries. Also a two-track access to the Fen Unit enters at the eastern boundary midpoint, crosses the wet swale and ends in Red Head Savanna at the boundary with the Fen Unit. 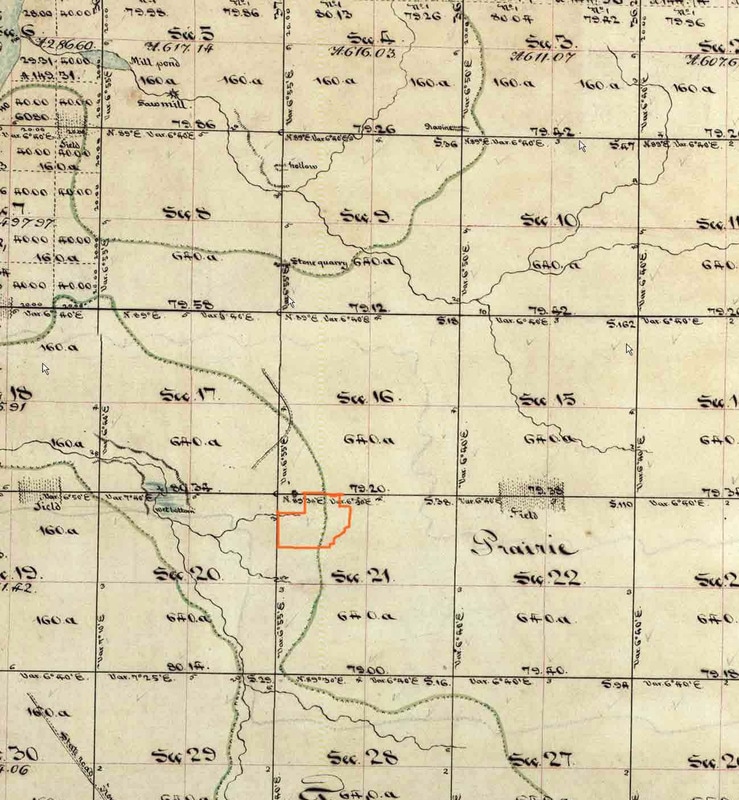 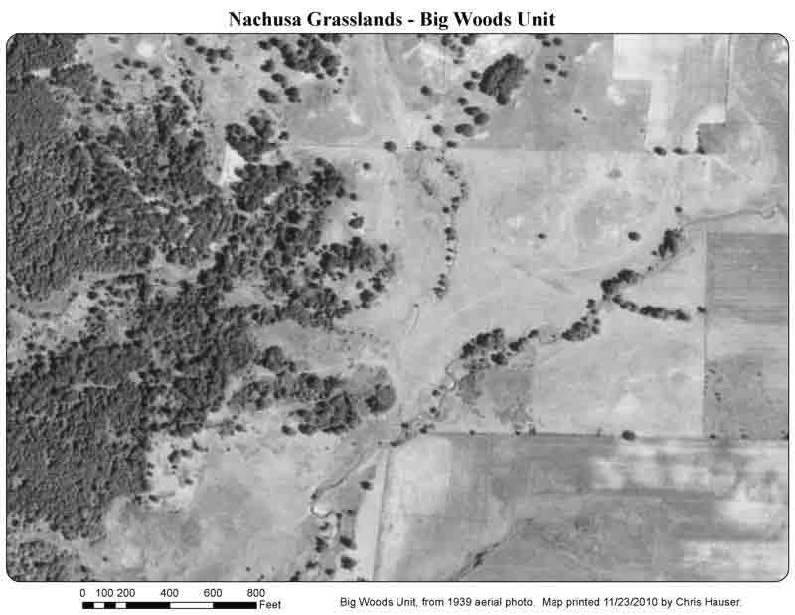 ​This unit probably had been in pasture since at least 1939. Both the 1939 aerial photo and the 1958 aerial photo show this area to be pasture or possibly hay. Earl Thomas long time resident of the area and currently living on Stone Barn Road has no memory of this area ever being in row crops. In the late 1800’s and early 1900’s you would expect that someone would have tried to plow the Big Woods area. However by the 1939 photo below, plow lines are not visible in Big Woods especially as compared to the surrounding field to the east, south and north. 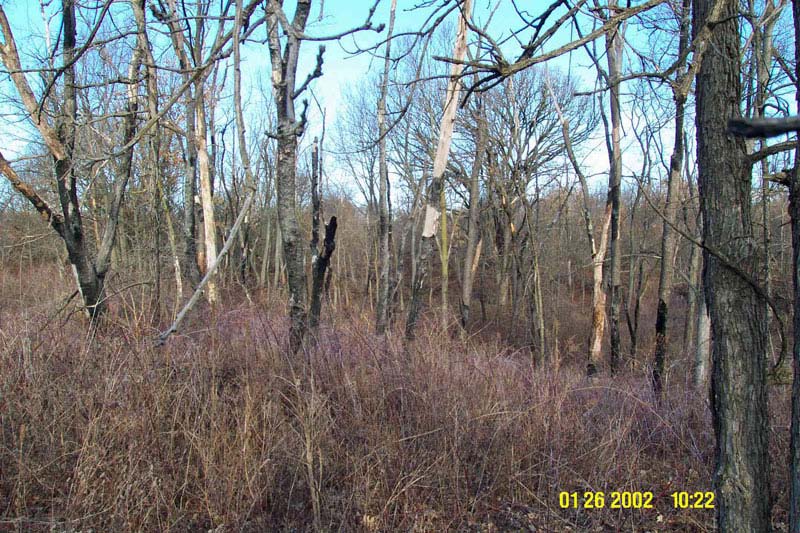 January 26 2002
​Bill and Susan Kleiman arrived at Nachusa Grasslands in 1993 and girdled most large cherry trees on the knobs. This January 2002 photo shows only the north side of South Knob looking west. Susan spent weeks on this project as there were at least four times as many cherries as shown in this one area. All the dead cherry trees eventually fell over, were used for fire wood or chopped up, stacked and burned. See Brush Removal Section. Susan planted some seed on Big Woods; see the Seeds Section for spreadsheets of species lists.

The unit has been burned every fire cycle since 2001; each year in April except October 2001, November 2007, November 2009 and December 2011. It was also burned in some earlier years. See Controlled Burns Section for details.
Site Preparations:
In April 2001, we began removing non-native and invasive plants. Some problem plants are essentially eliminated; for others the effort is ongoing.

Problem: Birdsfoot trefoil
Treatment: Crossbow primarily with some initial use of Transline

There is an ongoing brush cutting effort. By the end of 2012, 293 brush pile burns had occurred. To expedite the effects of a prescribed fire regimen we have built burn piles containing fallen girdled cherries, cherry resprouts, geoboy slash, nonnative woody shrubs e.g. honeysuckle and multiflora rose, windfalls, and any other invasives. The Brush Removal Section contains burn pile statistics.

Seed planting:
Some early planting was been done in spring after prescribed fire. A better approach is seeding in fall before the ground is frozen, even when the unit is not burned in the fall. Planting from 2001 through 2006 was hand broadcast by Becky and Hank Hartman. The savanna areas are not yet open enough to drive a vehicle. Besides there are randomly scattered areas which are high quality and thus too fragile to risk vehicular traffic. Beginning in 2004, custom seed mixes were prepared for the various soil conditions found on the unit. The Seeds Section contains seeding information for each year.

In 2007, the eastern field now referred to as Wade Bottoms was removed from the Dot/Doug Prairie and added to the Big Woods. The area was seeded using the gravity flow New Idea seeder pulled by the Jimmy. In 2008, Wade Bottoms was again overseeded, using a pendulum seed broadcaster attached to a small Kubota tractor.

In 2008 the North Field and the east side of the north drainage swale were also overseeded using the pendulum seeder attached to the Kubota. By 2009, the western one third of Wade Bottoms contained only minimal birdsfoot trefoil or brome. Cindy & John Schmadeke and Hank Hartman heavily overseeded this area by hand broadcasting. In 2009 all of Wade Bottoms was so wet as to not be feasible to drive a vehicle there. All other mixes were hand broadcast in 2007-2012. See Planting Plan spreadsheets in Seeds Section for yearly mixes and seeding details.
​
​Seed lists, seed mixes and planting plans:
​Susan Kleiman planted two seed mixes in 1999. See the Seeds Section for a summary overview of the Hartman seed mixes planted. The Big Woods Planting Plan spreadsheet tables show seed lists and mix details for each year of since 2001. Refer to the Map below for an explanation of the planting plan locations. 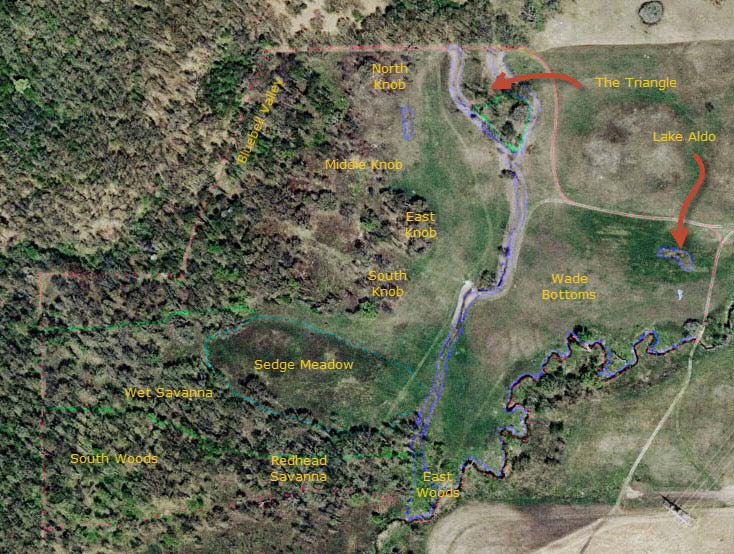 Map:
The entire Big Woods Unit is being over seeded. In the map above, the unit boundary is shown in red. The Sedge Meadow is outlined in turquoise. The two drainage areas entering at the northeast corner, point 18, are denoted in royal blue and are considered wet prairie. The area between these two drainages until they merge is named “The Triangle”. The creek floodplain area immediately adjacent to Wade Creek, which forms the southeast boundary, is also being seeded as wet prairie. An area in the north field, i.e. west of The Triangle has also been seeded as wet prairie. Wade Bottoms is the area bounded by the north/south wet swale on the west, Wade Creek on the southeast and two tracks on the other edges. It is seeded as mesic prairie.

​In the north area of Wade Bottoms extending east to west for two thirds of the Bottoms is the ephemeral “Lake Aldo” outlined in royal blue and also seeded as wet prairie. Since 2008 “Lake Aldo” has been obligate; check back for future changes in hydrology. West and south of the Sedge Meadow is wet savanna, outlined in green. The southern half of The Triangle is treated as wet savanna. All other savanna areas are considered dry savanna. The tops of the knobs north of the Sedge Meadow, identified as North Knob, Middle Knob, East Knob, and South Knob are seeded as dry hill prairie. All other open areas are dry prairie.

2005
Big Woods in 2005 as seen from Coyote Point on the Hammill Winter Unit looking northwest. Trees on left foreground are in East Woods. Note large 5-trunk willow which was removed at an East Woods workday. Snow covered high point in center photo is Middle Knob. East Knob appears east of Middle Knob. South Knob is the two “bumps” running east west. East side of North Knob is slightly visible to the right of Middle Knob. Tree line at right of photo is Eight Oaks south of Z-bridge.

February 2012
​​​Back to Big Woods Table of Contents